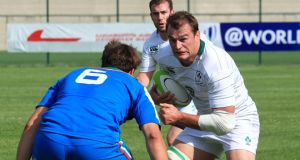 Rhys Ruddock could miss the World Cup after suffering an arm injury at the Tbilisi Cup.

Rhys Ruddock’s hopes of taking part in the World Cup rest upon the results of an x-ray after damaging his right arm just two months after surgery.

There were concerns among the Ireland camp after Ruddock was forced off just 20 minutes into captaining the Emerging XV in their stop-start victory over Uruguay in Tbilisi.

It was the same forearm the Leinster back-row broke against Harlequins in December that ruled him out of the Six Nations and that later required surgery in April following an unsuccessful return.

Now he awaits the result of a scan and x-ray, carried out last night in the Georgian capital, to reveal the damage to his arm and his hopes.

“We will have to wait 24 hours for the results of the X-ray and scan before we can make a real assessment of the injury,” said Emerging Ireland head coach Allen Clarke.

“He has had a knock there before so of course I am concerned for him as an individual.

“But he is a resolute young man and I’m sure he will bounce back should this rule him out of the tournament.”

Schmidt is due to arrive in Georgia for Sunday’s last match of the Tbilisi Cup against the hosts, who were beaten by Emerging Italy on Wednesday ahead of their final showdown with Ireland.

Ruddock’s injury only added to a “frustrating” game for the Irish against stubborn South American opponents who were relentless, competed well at the breakdown and claimed a well-earned a penalty try in the second-half as they, themselves, prepare for the World Cup.

By the time Ireland lost their skipper, they were already 19-0 ahead following tries from Eoin Griffin, John Cooney, his team’s best performer, and Cian Kelleher.

Munster tighthead Stephen Archer already had his opposite number under real pressure but when Uruguay’s pack were cut to seven forwards by a yellow card, Ireland’s scrum won a penalty try on the stroke of half-time.

But Kelleher was binned for cynically blocking a pass as Los Teros made life distinctly difficult for Ireland in the second half.

James Cronin struggled in the sweltering 35-degree heat. Replacement Rob Herring was twice wildly off-target at the lineout and Jack Conan had limited time off the bench.

Billy Holland and Reid were stopped short but scrum-half Cooney picked up and dived over for his team’s second before good passing handed Kelleher an easy finish.

Ireland looked to be strolling to a comfortable win before mistakes fuelled a gutsy Uruguay response.

“At times in the first half we looked a very good team but in the second we were distinctly average,” admitted Clarke.

“We were clinical, accurate and played with tempo. But after half-time, we made mistakes which gave Uruguay energy. The boys are frustrated and we have plenty to work on.”

1 Sideline Cut: Vignette shows why Bird is the true shark in The Last Dance
2 Daniel Abt disqualified for using ‘ringer’ in virtual race
3 Rory McIlroy now realising the power his words carry as world’s number one
4 How 1995 remains a key part of the Springbok spirit
5 Scottie Pippen said to be ‘beyond livid’ at Michael Jordan for portrayal in The Last Dance
Real news has value SUBSCRIBE