Leinster flanker needs another operation on injury he suffered in December 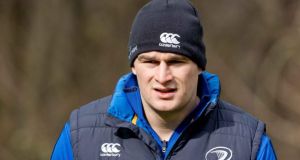 Rhys Ruddock’s truncated season has been ended by a recurrence of the arm problem which has sidelined him for all but two games since mid-December. The Leinster and Irish flanker, whose Test career took off in the autumn wins over South Africa and Australia, will now only have warm-up games to force his way into Joe Schmidt’s 30-man World Cup squad.

The province’s forwards coach, Leo Cullen, confirmed that Ruddock had to undergo another operation to have a plate inserted in his arm. “Rhys unfortunately has a situation with his arm so he has had to have that re-fixed which means that he is unlikely to feature for the remainder of the season,” said Cullen. “He was struggling when he came back and he got another bang on it. It’s just one of those unfortunate ones.”

Ruddock was a late replacement for an unwell Chris Henry on the morning of the win over South Africa, scoring a try and retaining his place for the win over Australia. Henry returned for Ulster at the weekend, thereby swelling the backrow options for the World Cup already featuring Seán O’Brien, Jamie Heaslip, Peter O’Mahony, Jordi Murphy and Tommy O’Donnell.

Comeback Ruddock had been sidelined since the win over Harlequins in December; he made

his comeback in Leinster’s games against the Ospreys and the Scarlets during the Six Nations, before suffering a recurrence of his arm injury.

“I don’t know what will pan out for him now with the Irish set-up,” said Cullen. “I’m sure he would have been pretty heavily involved and in the frame based on his form in November, when he was outstanding. He’s probably looking at those pre-World Cup warm-up games but that’s the Irish management’s call. There are a couple of players coming back from injury in the backrow. It’s tough because Rhys is such an important character in our squad.”

Fortunately for Leinster, they are well stocked in this department. Indeed, even though Kevin McLaughlin is also still rehabbing from a shoulder operation (“he still has a couple of weeks to go,” said Cullen), they can still perm three from Murphy, O’Brien, Heaslip, Dominic Ryan, Shane Jennings and Jack Conan in their European Champions Cup quarter-final against Bath at the Aviva Stadium next Saturday.

In the short-term, there was seemingly better news regarding Eoin Reddan, who was taken off with concussion past the half-hour mark in the 34-all draw at home to Glasgow on Friday. Cullen confirmed that the scrum-half is observing the return-to-play protocols but added: “He should be fine.” Likewise, the eye injury which forced Richardt Strauss withdrawal at half-time last Friday night is not expected to rule him out of contention.

Leinster should also welcome back Mike Ross, Devin Toner, O’Brien, Heaslip and Rob Kearney this week, none of whom have played for Leinster since the 20-all draw with Wasps which secured qualification for the quarter-finals and a home tie with Bath; and some, such as Ross and O’Brien, since further back.

Indeed, O’Brien’s only game for Leinster in this campaign was their seasonal opener away to Glasgow, which Cullen admitted made preparations “difficult” for next Saturday’s first home quarter-final since they won the trophy three seasons ago. “You have four English teams, three French teams and we’re sort of flying the flag for Pro12. It is a big occasion for us. We need a huge performance because at the moment every game is the biggest game for us. I really hope the supporters get behind the team like they have. They make these occasions.

“In many ways it’s been the main thing on my mind since we played Wasps. I know talking to some of the players how much it means to them going into this occasion as well.

“There are always factors, trying to reintegrate everybody. Everyone is coming back over the next couple of days and hopefully we will be in good shape by the time the game comes around.”