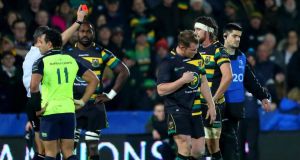 First off this was a victory honed out of Leinster’s desire, resilience and, undoubtedly, superior discipline. Inevitably though, it will be over-shadowed by the red card which England captain and serial offender Dylan Hartley justifiably incurred within six minutes of his introduction.

By then, Leinster had seen a 10-0 lead erased and lost both Joey Carbery and Rob Kearney, leaving them with an even more callow backline than they started with. From the 42nd minute, they had three European debutants.

That was the cue for their heavyweight pack to flex its pecs, Sean O’Brien’s close-range try the reward for an imposing passage of scrums and mauls, to restore their 10 point lead.

From 20-10 they would assuredly have gone on to win in any case, regardless of Hartley’s latest moment of madness. When O’Brien was turned in the tackle as he carried again, Hartley came from behind with a wild, swinging arm across the side of O’Brien’s head. It could have led to a serious injury, and as it was O’Brien went off not to return.

Audible gasps having been the reaction to the first replays on the big screen, when Jerome Garces declared a “clear swinging arm into the head, red card”, there was not one dissenting boo even in Franklin’s Gardens.

The ramifications on the night and in the long-term were and will be huge. The home crowd and team numbed, Leinster went on to score three more tries for a handsome bonus point which leaves them in charge of this pool.

Given a rap sheet which has accumulated 54 weeks in bans, not only will a lengthy ban seriously endanger his English captaincy (in attendance, Eddie Jones just ran his gloved hand down his face in exasperation) but his candidacy to lead the Lions too in the nation of his birth.

Leinster had bookended the contest as its dominant force. One of Leinster’s primary aims would have been to quieten the Franklin’s Gardens crowd after their ‘Saints go marching in anthem’ at kick-off, and within 51 seconds they had stunned them into silence.

After O’Brien’s fine take from the kick-off, Northampton came in from the side when Josh van der Flier trucked it up. An animated Rob Kearney was barking instructions at his teammates as Carbery found touch 40 metres up the line. From off the top ball, Robbie Henshaw trucked it up and eight rapid fire phases later, Kearney dummied the Northampton lock Michael Paterson before drawing Ben Foden to give the try-scoring pass inside to Garry Ringrose, who had carried hard twice himself and ran a good support trailer.

The superior Leinster scrum first mangled Northampton’s put-in and then earned the penalty with which Nacewa made it 10-0. Cue ‘Cockles and Mussels’.

However, Carbery was soon after having his right ankle heavily strapped. Although he returned to the fray to make one more tackle, he immediately limped to the touchline.

When Nacewa then left an up-and-under by Ben Foden, the ball bounced wickedly behind Adam Byrne and though he ran it back strongly, tight-head Paul Hill poached for the penalty which Stephen Myler landed.

Tails up, Northampton went quickly wide right and left, using Louis Picamoles (clearly hampered) as a distributor, forcing some scrambling defence by Luke McGrath and then Kearney and Ross Byrne on the other side. Leinster exited, eventually, and probed again.

An exhaustive and laboured multiple phase attack off a maul, mostly through the forwards, came to naught when Henshaw had the ball dislodged in the tackle. After Adam Byrne made a stunning aerial take, it took five players to eventually haul him down and when O’Brien ran in from 35 metres recourse to the TMO rightly adjudged he’d knocked on before re-gathering his own chip.

Even then, Nic Groom broke off a scrum but kicked over the touchline, so the half ended with Leinster leading 10-3, but knowing it might have been more given seven line breaks to one. Despite one nice spot move which saw Henshaw release Adam Byrne, their running game seemed to lose some shape without Carbery.

When Kearney followed this meant a third European debutant in the backline in Rory O’Loughlin, who went to left wing with Nacewa to his best position of full-back.

Soon JJ Hanrahan sliced through, beating Luke McGrath’s tackle, and then from the recycle his long skip pass put Ahsee Tuala over, Myler converting to make it 10-all.

But Nacewa restored the lead after side entry by Tom Wood before two big scrums from the Leinster pack bucked up their spirits and yielded penalties. The second earned an attacking maul, and side entry there earned a five-metre maul as Leinster rightly closer went to the corner.

Although the maul was held up, Luke McGrath darted before O’Brien, helped by Heaslip, forced a touchdown through the combined tackles of Myler and Hanrahan.

Jamison Gibson-Park then secured the extra point when taking O’Loughlin’s pass off turnover ball to score from inside half-way, checking Luther Burrell and deftly stepping inside two more tackles for an audacious finish.

There was even time for George Pisi to incur a yellow card for his high tackle on Nacewa who, undeterred, subsequently bounced through another tackle to score a fifth.