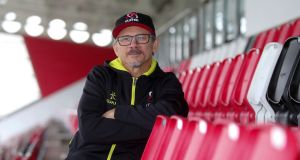 Les Kiss: “If Clermont win they’re in charge of everything and then we’re pretty low in the points to be able to get one of those second-place spots.” Photograph: Jonathan Porter/Inpho/Presseye

It’s just as well rugby matches aren’t played on paper because the statistical minutiae surrounding this fixture would point towards a handsome Clermont victory.

Sitting atop the French Top14, they enjoyed a thumping victory over the Exeter Chiefs at Sandy Park – Ulster managed a single point victory over the English club in Belfast – and then had 16 points to spare in a free-scoring win over a gutsy Bordeaux Begles at Stade Marcel Michelin. Bordeaux were conquerors of the Irish province at home in the opening round of Champions Cup fixtures.

The upshot is that the excellent Louis Ludik is named on the wing with Irish international Robbie Diack swapping the backrow for the secondrow.

It’s not an unfamiliar role for Diack but it is very much a case of ‘needs must’. Ulster’s three quarter line still exudes talent and in fullback Charles Piutau the home side possess one of the tournament’s best players.

Paddy Jackson excelled for Ireland against Australia and Ruan Pienaar was instrumental in guiding the team to a win in Cardiff last week.

It’s up front that Ulster look a little underpowered and that threatens to be a significant handicap against a powerful Clermont eight.

Ulster and Ireland captain Rory Best will relish the challenge but he’ll have to be at his inspirational best, in word and deed, to unearth a performance from the forwards that will give the team a chance; that means bringing an edge to the set piece, the breakdown and most importantly the collisions.

Kiss offered a pragmatic appraisal of the task ahead: “You look at them and you can’t help but be impressed by what they can offer. You admire them but it puts the fear of God in you really. I’m not telling anyone anything new here.

“We’ve had a reality check when we looked at the video this week. They are a team that can attack you from anywhere. They use their massive pack to [good] effect. [Morgan] Parra, [Camille] Lopez in the halves pulling the strings, they can shift it wide pretty quick and when you have [Wesly] Fofana and [Remi] Lamerat in the centre; they’re a brilliant team to watch.

“We have to make them not so brilliant on Saturday. That’s what Europe is. On this stage, you’ve got to accept that’s what it’s about. I think this is the key game. If Clermont win they’re in charge of everything and then we’re pretty low in the points to be able to get one of those second-place spots. It’s pretty important overall.”

Ulster have enjoyed many great European nights in Belfast and a win would compare favourably but it’s hard to look past Clermont in the prevailing circumstances.