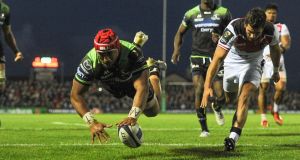 Pat Lam stops short of saying it, but there is a strong chance that of all the glittering moments Connacht offered its public against Toulouse on Saturday night, the passage of play that pleased him most was a late-in-the-evening scrum.

His pack didn’t do anything spectacular – but, crucially, they didn’t fold. For most of the match, the complete authority with which the gargantuan Toulouse eight had made Connacht’s scrum disintegrate had been a spectacle in itself.

At one point in the second half, the French scrum contested a Connacht put-in and, after a brief contest, they simply steamrolled their opponents, like one of those Panzer tank scenes in an old war movie. So Lam took immense satisfaction of what he saw in the 76th minute. This time, it was a Toulouse put-in.

“And we held them. And the referee made them use it and we ended up turning the ball over. But that could have been another scum penalty if they [the Connacht pack] had easily given up.”

You have to think Lam’s satisfaction arises from the fact the play represented another example of Connacht learning as they go – and of their collective pragmatism. The might of the Toulouse scrum hadn’t exactly come without advance forecast.

“We were giving away such a weight advantage and we saw what they did to the Clermont scrum,” Lam said. “They are massive men.”

It so happened that Connacht were encountering the most formidable scrum in the European game just six matches into their new season, during a time when they are reconstructing their frontrow. If the departure of Rodney Ah You was flagged, then the enforced retirement through injury of Nathan White was a big blow – and the subsequent injuries to Denis Buckley and Tom McCartney a potential crisis.

And it wasn’t only in the frontrow that Connacht was conceding experience and physique.

“We lost Quinn Roux,” Lam pointed out. “And the reason he is in that Irish team is probably is scrimmaging. He is one of the best right-side scrum locks in the country. You take those four key people out against that scrum and you are facing a massive challenge.

“And the thing I was proud of is that you could see those boys held them for long periods of time. It is a lot of pressure that is going on. So it is not just the frontrow; there is a young group in there, learning their trade, and that will improve our depth.”

Under Lam, Connacht have made a virtue of thriving on less. Marnitz Boshoff, the Nelspruit outhalf signed for the club several months ago, just arrived in Galway this weekend. With Craig Ronaldson recuperating from a long bout of injury, Lam persuaded his son Mitch to swap Auckland for Galway so Connacht would have some cover in the No 10 position.

Mitch wasn’t that keen initially, but he committed to it and played outhalf in Sunday’s 23-10 defeat by Cornish Pirates in the B&I Cup. He is in Parma this weekend as cover for regular outhalf Jack Carty.

That kick was another demonstration of Connacht adapting on the hoof. Carty had been having mixed fortunes with his goal-kicking through the evening. After Bundee Aki’s try, Ronaldson received an unexpected summons to have a shot.

“To be honest, I didn’t think about it because there was a bit of time left on the clock,” Ronaldson recalled after training this week. “I only got the call late, so I was just trying to slow my breathing down and get composed. It really does go bizarrely quiet. It does get quite eerie at times. It is hard to replicate that pressure at practice, but it paid off.

“My kicking has been restricted because of the quad injury. I am just getting a few sessions with Eric, and you learn so much off him.”

In the immediate afterglow of a famous win on Saturday night, Lam had simply reiterated his faith in Ronaldson: he is a kicker, so nailing those kicks is what he expects of himself. It was Ronaldson’s contribution to the attacking energy and variety flooding from Connacht’s midfield sector that Lam emphasised during the week.

Watching Toulouse on Saturday, more than one Connacht supporter must have wondered how much Robbie Henshaw would have enjoyed the evening. The home three-quarters line had licence to run riot from whenever and wherever. Ronaldson’s return just added to the angles of attack.

“Craig offers something totally different to the midfield,” Lam said. “That’s what you want. You’ve got Bundee, who is Bundee. You got Peter Robb, who is pretty abrasive and hardly makes errors. Craig brings a kicking game and has a lot of experience at outhalf and you got a left foot there too. You’ve Eoin Griffin who has a really good passing game; Rory Parata.

“So there is good competition in that midfield now, an area where people thought would be difficult when Robbie left.”

He believes one of the reasons for Connacht’s underwhelming start to the season was they lacked sufficient impact from the bench: “The secret for us is competition. I want to have headaches every time.”

That has been rectified. One of the joys of being in the Connacht squad just now is that you know you aren’t sitting on the bench for appearances sake. You will get time.

Tiernan O’Halloran’s absence for tomorrow afternoon’s Champions Cup pool game against Zebre means another rotation in the line-up. O’Halloran seems to be elevating the standard and self-belief in his game every time Connacht play.

“He gets pretty hard on himself if he doesn’t get things right,” Lam said, predicting that the fullback should be fit again for the critical Pro 12 visit to Leinster at the end of the month. But his injury is just another disruption for Lam and Connacht to iron out.

It has been an odd week for the Galway club. The mood at training was sombre at times because of the tragic death of Anthony Foley, who Lam and several of the senior players knew well. Then, on Monday, Lam received an honorary doctorate from NUIG, an accolade which he says is representative of his time in the west of Ireland.

“Very proud of them. Because they started my first year here. I came here in April, kicked in in June. They started in August and it made me realise they got their degrees: that is how long I have been here. They are a good example of working extremely hard to get their education and degrees, so I was extremely proud.”

The day was in keeping with Lam’s vision of Connacht embarking on an adventure centred around the rugby field but also bigger than that. Last Saturday in Toulouse was one of those moments when that vision was illuminated, gloriously. Tomorrow it’s back to brass tacks, digging in against an Italian side desperate to prove their worth in this competition.

Lam has prioritised defence: solid, fundamental stopping. Then the tries will come. Connacht are in Italy as Pro 12 champs and under pressure to do what’s expected of them. The point behind the pyrotechnics and delight of the Toulouse win must be: this is where Connacht are at now.

“In years gone past, maybe a big interpro win would have the changing-room buzzing,” says Ronaldson. “At the weekend we were happy with the outcome, but we realised we have to back it up now. That is where we got to at the end of last season and where we want to stay: putting in big performance after big performance.

“And we really want to prove that we can be at the top table of European rugby.”