Northampton have no complaints over Dylan Hartley red 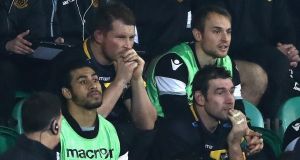 Dylan Hartley of Northampton looks dejected after being shown the red card by referee Jerome Garces during the European Rugby Champions Cup game against Leinster. Photograph: by David Rogers/Getty Images

A bitterly disappointed Northampton Director of Rugby Jim Mallinder had no complaints whatsoever with the red incurred by his hooker Dylan Hartley, although he did not necessarily think it cost his team the match. He also accepted that Hartley will face a lengthy ban.

“It’s a strike to the head, we’ve seen enough of them over the last few weeks,” said Mallinder succinctly. “I think it was a red card.”

“I wouldn’t say it cost us the game, I think we started badly and came back into the game pretty well. We had just conceded a try actually, we were already a few points down. But I think when you go down to 14 men against such a quality side as Leinster then you’re always going to be up against it.”

Despite his extensive rap sheet, Hartley had seemingly turned a corner in his chequered career until Friday night’s incident, captaining England to their 14-match winning streak under Eddie Jones.

“Certainly, he’s been playing really well and leading England by example so it was disappointing that on returning from England after doing such a job that that happens.”

Asked if Hartley will receive a lengthy suspension, Mallinder said: “Yeah, I think so.”

A ban of around eight weeks would still conceivably make Hartley eligible for the Six Nations, meaning the consequences of his ugly swinging arm at Sean O’Brien’s head will be more significant. “Well, we’ve had a couple with Kieran Brookes and Calum Clark already, we know the damage that it can cost the team,” said Mallinder, who was asked if he felt let down.

Mallinder’s counterpart, Leo Cullen, kept his counsel on the issue, perhaps mindful that Northampton come to the Aviva next Saturday seeking to emulate their revenge win three years ago a week after Leinster won 40-7 here.

While describing it as “a swinging arm to the head,” he added: “We’ve enough to worry about ourselves, we just need to worry about trying to play the game and let the officials worry about policing the game. We’ll see how Seanie is and maybe comment after that.”

Regarding the injuries to O’Brien and Joey Carbery and Rob Kearney, Cullen said: “Seánie took a head knock so I’ll just see how he is. Rob and Joey are both ankles. They both tried to run it off, Joey for probably a bit longer. Rob did his just before half-time and he felt probably a bit happier. I wasn’t sure about him running around but he felt pretty keen to continue, and we made the call anyway.”

“Obviously Ross Byrne has played plenty anyway for Joey so we had a bit of confidence there. They had played pretty much half the game each last week and the week before that Ross had played against Scarlets and before the break against Zebre as well.”

“Rory has been great for us. We’ve a lot of confidence in him and then you’ve Isa to fullback as well. We’ll get them assessed. It’s been a reasonably physical encounter so we’ll see. Northampton had a few guys go off as well with ice packs on their ankles. There’s something about ankles this week. I don’t know what that is about.”

1 Born to ride, born to win: Sam Bennett, the making of a green machine
2 Leinster look ready to step things up and burn off Saracens challenge
3 Keith Duggan: Surreal story of John Delaney needs to act as a wake-up call for FAI
4 Rory McIlroy battles to stay in the mix as Patrick Reed leads the US Open
5 Lance Armstrong’s latest move serving him well on many fronts
Real news has value SUBSCRIBE

Leinster look ready to step things up and burn off Saracens challenge 06:00
Misfiring Ulster facing a torrid time in Toulouse 06:00
Etneya win at Gowran would prove a fitting tribute to Smullen 06:00
O’Sheas and Breaffy looking to take final step to a first Mayo senior title 06:00
Paul Galvin’s Wexford departure takes a little of the shine off things 06:00
Crossword Get access to over 6,000 interactive crosswords