Luke Fitzgerald back as Leinster bid to give Castres the blues 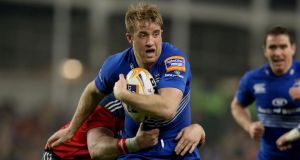 Castres v Leinster, Stade Pierre Antoine, Sunday, 1.0pm: This preview can’t but focus fairly heavily on Luke Fitzgerald’s latest return to the field of play. “That guy has had a rollercoaster ride probably since 2009 the Lions tour in South Africa in terms of injuries,” said Leinster captain Jamie Heaslip yesterday. “Going into the hospital to see him after nearly three-career ending injuries he has had – it is a testament to see the guy keeps coming back.

“I’m just delighted to see the kid playing,” Heaslip continued. “ I won my first cap with Lukey. We went on that first Lions tour together. I would have thought by this stage we would have played together a whole lot more what with his calibre and skill.”

Heaslip has gone on to play 72 Test matches to Fitzgerald’s 28 since both ran out for their first on the last day of Lansdowne road, against the Pacific Islands in November 2006.

“We’ve been really patient with him,” said Matt O’Connor. “We have given him time to get his body right and a bit of time to get his head right. He has trained incredibly well over the last two weeks. He’s a class athlete, a quality footballer.”

Still, the injury could flare up again.

“It’s probably more of an ongoing issue we got to stay on top of it and manage the amount of volume he does in terms of training,” said O’Connor. “ It is going to be ongoing for the next 12 to 18 months to make sure he is doing everything he is can to make sure his groin and pelvis area are healthy. It is something he has to commit to every day.”

Natural ability Such is Fitzgerald’s natural ability, his progress is worth tracking today in what should be Leinster victory. They beat a far stronger Castres side down here last season. The brilliant flanker Ibrahim Diarra, centre Remi Lamerat and particularly scrumhalf Rory Kockott feel irreplaceable.

They also arrive off the back of heavy defeats to Harlequins and Bordeaux Begles.

“It’s very, very hard to gauge the mindset,” O’Connor admitted. “It’s largely irrelevant for us the fact that there is no Kockott and no Lamerat. It takes a little of the X factor out of their group which is helpful.

“At the RDS I thought Kockott was outstanding and, across the two games, I through Lamerat was probably as good a player as there was on the field. From that end we are relatively pleased but at the same time it’s a very, very good squad,” he said.

“They are going to be very direct and very abrasive and back their set piece to try and get moment and try and get points from there.”

Leinster know the drill. They know how to soak it all up and they know how important it is to be ruthless when the chances come.

Heaslip won’t be allowed the yardage from last Sunday’s 23 carries so Sean Cronin, Rhys Ruddock and Dominic Ryan will all need to find another gear. Ruddock and Ryan have picked up the scent of international recognition. That should help.

Zane Kirchner at fullback adequately covers the loss of Rob Kearney with Ian Madigan’s switch to 12 doing his Irish credentials no harm.

The bench, however, looks a little light in terms of genuine impact and experience. Should Tadhg Furlong and Ed Byrne rubbish that suggestion then Leinster will be just fine. Either way, they can squeeze eight points out of October and move on.

Matt O’Connor has ruled out any chance of Kane Douglas being called up to Michael Cheika’s Wallaby squad ahead of the November internationals. “No, (the ARU) won’t change their policy,” he said. “Not a chance. It would be the end of Super Rugby in Australia if they are going to pick blokes from abroad. I can’t see it happening.”