Liam Toland: Coaching continuity will point the way to a bright future 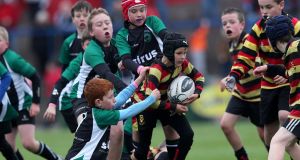 Continuity is crucial for our game; it requires an understanding of space; how to create it and then how to exploit it. Photograph: Ryan Byrne/Inpho

My father played Gaelic football for Donegal. This is some effort but to do so as a minor and senior in the same season is pretty remarkable. In fact he required special permission from the Bishop of Raphoe William MacNeeley while in Leaving Cert year to play in the Ulster senior football championship.

Loyalty prevented him transferring to Galway while studying in UCG. In that period Galway won three All-Irelands in a row! Arriving into Limerick we soon found ourselves in Co Clare where we engaged in every sport available.

My brother led the way and I went on to play football for Clare at minor level. At Irish Schools level many of the skills honed in Gaelic games came to the fore.

At one point we could mimic the great Zinzan Brooke; for we too could drop goals, field over our head, pass off both hands and solo any ball. But as the rugby years went on I drifted further from my father’s DNA and Gaelic games.

At one Irish senior squad session when I asked I was told ‘there is no counter attack policy’. My point?

There is no end to the football ability on this island so it’s simply a matter of early coaching intervention aligned to appropriate underage competitions and not the win -at-all-costs rugby which parents are often pushing hard for on the sideline.

We did this drill in Leinster, a team full of Lions, internationals and quality interprovincials. I do this with underage players all the time.

As happened at Leinster I reduce the defenders to two and eventually to one to give the seven attackers ‘a chance’ of a score. Yes, it’s that bad. Try it in training this week. How can seven players with plenty of width not score every time when faced by two or three defenders? Watch how many avoid the ball or simply find a defender to run into.

Continuity is crucial for our game; it requires an understanding of space; how to create it and then how to exploit it. It requires the seven attackers to understand this principle; not just Brian O’Driscoll.

Then it requires all seven players to add value, whether on or off the ball, fixing defenders etc. Over months the underage players gaining in understanding and confidence start scoring tries and love it.

Then we can narrow the width where space is less obvious but the principles are the same; here the Argentines are brilliant. So what are the building blocks? Willie Anderson had a great drill. The individual on the ball who understands how to dominate the defender. But drills are useless unless there are key decisions inherent to the drill otherwise it is a fitness exercise.

So Willie created, ad nauseam, a 5m by 5m square with a defender in the centre. Then ball carriers, starting from the base line had to beat the defender to get to the other side. A lazy straight line is easy to defend so if the ball carrier is motivated suitably then he’ll need fast feet and a wee jink to plant the defender before picking a soft shoulder to attack. Then he’ll need the confidence to power while pumping his legs hence dominating a weak tackle. Start easier with the defender grabbing the ball carrier’s shorts. On contact the carrier simply pumps his legs, dragging the defender towards the line.

This 5m by 5m square should be the building block of all continuity drills (no hiding place!). Where traditionally the defender (or big parent coach) held a tackle shield for the attacker to launch into, this drill and all subsequent drills should be to encourage the attacker to gain advantage over the defender and then power through. Likewise the defenders require suitable focus in order to maximise their efforts where they need to dominate the attacker; thereby making a better quality hit. Should that hit arrive then the ball player has several options before, in and after contact to get the offload away.

But it starts with an attitude to dominate the tackle thus making the offload far less risky and far more potent.

Next drill; ‘tunnel of love’. This is the bridging ‘game’ between the 5m square and the 7 v 3 above. Every international team in the RWC played a version of this. The scrumhalf at the base of the ruck would have a myriad of options around the base and around his No 10. This can be recreated in training with emphasis on support lines and angles of running.

Remember the small prop from Old Crescent? Well he continues to work like a prop but his eyes open up as he hunts for the ball. Yes he drops it all the time and yes he’s continually upset when he does but every now and then he breaks a tackle, runs for 15 metres and offloads to a hungry supporter. All the while he has stayed on his feet and continues to add value. Success?

I’ve noticed a pair of quality underage centres in Limerick who have done serious damage to our team over the seasons. Unfortunately they have not evolved from utilising their natural power and physique; only passing the ball at the death and they will soon be caught as they have not developed their rugby. However, they win matches. Success?

Coaching, continuity and appropriate competition; not win at all costs. liamtoland@yahoo.com