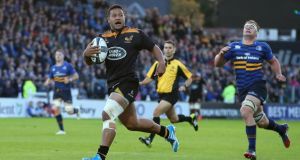 Reading Joe Schmidt’s mind on selection requires the prophetic powers of a soothsayer. One certainty, which was not always the case with previous Ireland coaches, is Schmidt rewards form.

See Dominic Ryan’s promotion after finally stringing together a run of games in the Leinster backrow alongside Jamie Heaslip and Rhys Ruddock.

The Ireland backrow for the gargantuan Springboks struggle on November 8th should see Munster captain Peter O’Mahony and Ulster’s Chris Henry flank Heaslip. But Ruddock’s form demands inclusion on the bench, simply because the balance of the aforementioned trio delivered a championship in Paris last March.

Iain Henderson and Jordi Murphy largely provided the cover last season with Ruddock winning his second cap off the bench against Italy, almost four years after his debut in Brisbane when still only 19.

Henderson and Murphy are currently among a 15-strong injury list, only denied the ability to form a Test side by the lack of halfbacks.

In last Sunday’s 25-20 defeat of Wasps, Ryan crashed over for a try and Heaslip obliterated all and sundry on the statistics chart (23 carries and 12 tackles). Ruddock trucked it up 16 times.

“Jamie’s performance is pretty inspirational and, hopefully, it inspires everyone to row in behind him, try to emulate that sort of work rate,” said Ruddock.

“On the whole, on review of the game, on the stats, people were bringing a different intensity to the previous games this season, everyone’s work rate, everyone’s metres covered, impacts in the game were all much higher.

“While Jamie stood out, everyone put in a big shift at the weekend”.

Ruddock almost achieved something last Sunday that Schmidt identified as the difference between Ireland and the All Blacks 11 months ago.

You may remember Rob Kearney’s breakaway try that day. In the 23rd minute at the RDS Alapati Leiua intercepted Noel Reid’s pass before racing 85 metres for a try.

In Brian O’Driscoll’s autobiography, which comes out today, he wrote about the debriefing Schmidt had with his players after the agonising New Zealand defeat: “The next time Joe sees us he talks about the seven system errors he picked out in the way we defended in the last 100 seconds. And he talks about Kieran Read and the way he kept Kearns in the corner [on that breakaway try]. ‘That’s what it takes,’ he says. ‘That’s what it takes.’”

Ruddock’s face, last weekend, is a picture of agony as he attempts something similar, when other Leinster forwards accepted the cheap seven-pointer as inevitable. Several reporters, including this one, identified the tracker as Heaslip due to similar white headbands.

“I might take the head-gear off then!” said Ruddock. “Nah, I don’t mind. I managed to claim Dominic Ryan’s try at one point. One of the fans after the game asked was it me who scored the try and I said ‘yes’.

“You win some you lose some. It doesn’t really bother me as long as the general message was that our backrow seemed to stand up and really take it to Wasps. As long as we front up as a team it doesn’t really matter.”

“Their backrow is really strong and players like (Ibrahim) Diarra who we targeted last year, but he still managed to have a great game and really impacted on us in the breakdown especially. I think we’ll have to have a step-up there.”