Leinster on the mend but still looking down barrel in Europe 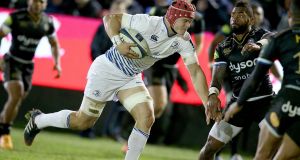 Josh van der Flier runs in for his side’s try during the European Champions Cup game against Bath at The Recreation Ground. Photograph: Dan Sheridan/Inpho

Rejuvenated by their Kiwi contingent, there was no shame in losing this game to a 77th minute penalty. Mentally and physically, this was a worthy response by Leinster but not enough to atone sufficiently for last week’s crushing defeat at home to Wasps. Not since losing their opening two matches in the 1996-97 season have Leinster been so cornered, not least with Toulon lurking in the ling grass.

Bath, as expected, had much the more developed, cohesive and ambitious attacking game _ epitomised by the two sides’ contrasting counter-attacking _ but Leinster’s cussedness and scrambling defence kept them in the game despite a near 60-40 split in possession and territory. If they’d had something even resembling a scrum, who knows?

Despite an all-Irish front-row, and seven forwards in total who featured to at least some degree at the World Cup along with replacement prop Jack McGrath, the Leinster scrum was all but obliterated and effectively cost them this match. In all, they were penalised seven times if one includes the penalty try which Jerome Garces awarded, and given George Ford also nailed a couple of scrum penalties, this effectively accounted for 13 of Bath’s 19 points.

But the damage went even deeper than that, giving the home team huge momentum shifts and plenty of psychic energy for them and crowd alike to feed off, as well as denying Leinster avenues into the game. For the most part, Leinster were penalised for wheeling, and this was usually the result of their tight-head side going backwards whereas the loose-head side sometimes even went forward.

Leinster did earn a couple of penalties from two of their three put-ins, but were pinged on the other occasion and six times in all on Bath’s feed. As Bath generally stayed with the scrum in search of penalties, this meant there were only four that led to any actual rugby.

It appeared that once again Mike McCarthy was missed, and matters improved only marginally and briefly with the introduction of McGrath and Marty Moorel, with Bath in the ascendancy even when finishing the game with their fifth and sixth choice props. Nor did the absence of a lock on the bench probably help either, with Rhys Ruddock obliged to shift into the second-row with the enforced departure of Hayden Triggs. The Kiwi put in a good shift on his debut.

Indeed, so too did his compatriots, Ben Te’o and Isa Nacewa. Te’o was full of physical intent in doing more than anything to improve Leinster’s line speed, and generally sound in both his decision making and execution when coming off the line to prevent from Bath getting outside the Leinster defence. He also looked dangerous with the ball.

When Sean Cronin ignited Leinster just before half-time with a 40 metre gallop up the touchline from Trigg’s return pass from a line-out, Te’o might well have reaped a bigger reward had the ball gone wide straight from the recycle. Instead though, Ruddock trucked it up and Bath had time to regroup and re-allign.

Nacewa made a sizeable difference on his return at full-back, all the emore so as he had to cover so much ground given Bath’s willingness to go wide and recycle from deep brought Leinster’s wingers up into the defensive line.

As well as a couple of try-saving tackles, it was Nacewa who revived Leinster at 9-3 down early in the second-half when he fed Heaslip for a counter-attacking rumble, then picked and went, offloaded to Triggs and effected the clear-out, before Teo’s muscled through a tackle and over the gain line. From Fitzgerald’s kick ahead _ those outside were too deep _ Nacewa even won the penalty for not releasing from which Sexton made it 9-6.

Devin Toner and Luke Fitzgerald also typified the team’s work-rate but Leinster’s other most eye-catching performers were those untainted by the World Cup, particularly those off the bench. Trailing 16-9 after their scrum crumbled again, Luke McGrath’s decidedly belated introduction quickened Leinster’s tempo, which admittedly should be expected, but it was significant and immediate. Significantly too, it was had running by Dominic Ryan, 23-year-old hooker James Tracy and fellow debutant Josh van der Flier which culminated in the latter scoring with a superb close-in line from deep to take the tackles of Niko Matawalu and Anthony Watson to score. By contrast, the likes of Cian Healy, Jordi Murphy and Johnny Sexton don’t look themselves at all, and appear to be either struggling physically or mentally.

In stark contrast, the likes of Ford and Watson appear to be suffering no World Cup hangover. Either side of the excellent Ford restoring Bath’s lead, fittingly with another scrum penalty, Leinster’s chances hinged on their decision at 16-all to opt for a 55 metre shot at goal by Sexton which was well short rather than go up the line, and then an apparent breakdown in communication and/or concentration which saw no-one lifted for Tracy’s throw 35 metres out. This compounded two earlier crooked throws by Cronin.

Despite way more possession, Bath kicked the ball less, and trusted their skills and each other to run back restarts (Leinster’s poor exit strategy and execution seemed to revolve around testing the mountainous Matt Banahan in the air) or counter.

Not only do they play an entertaining brand of rugby, in truth Bath were full value for their win.