Johann van Graan: ‘We’ll take a win against Saracens any day of the week’ 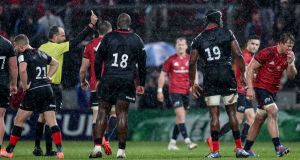 Conditions in what was ultimately a scoreless second half at Thomond Park were so horrendous that according to Munster head coach Johann van Graan and captain Peter O’Mahony both sides were better off without the ball than with it.

Both sides had, said the coach, studied their meteorological services in advance of the game, with the rain arriving pretty much exactly as forecast just after 6pm, towards the end of the first half. This also made it a good toss for Saracens to win.

“I’m very glad about the win,” maintained Van Graan, despite a reshuffled Saracens departing with a bonus point. “They were very tough conditions in the last 50 minutes of the game. They won the toss and elected to play against the wind. Both teams did their homework about the weather, we knew the weather was coming in and we created quite a few chances in that first half.

“Big call there on the knock-on on their goalline; I’ll just leave it at that,” said Van Graan a tad curiously of the moment Stephen Archer knocked-on after Munster had taken Saracens through 18 phases and inches with a couple of metres of the try-line.

“In the second half, they just played the conditions pretty well and pinned us in our half. The longer the game went on, in the last 20 minutes you didn’t actually want the ball because it was so difficult to handle. Then I thought our lineout contesting won it there at the end, so we’re very glad about the win.”

The Munster head coached admitted that Saracens’ bonus point could be crucial, but maintained: “We’ll take a win against Saracens any day of the week. Right from the start, we knew this pool was going to be tight.”

“From our point of view, we are still unbeaten in this group. An away win with a bonus-point [against Ospreys], a home win against Saracens, and a draw against Racing. So it’s going to go right down to the wire and the only thing we can control is next week against Saracens in London.”

Van Graan also had no quibbles with the red card brandished by Romain Poite to Arno Botha in the penultimate play of the game, which also afforded Saracens one more attacking lineout after it appeared the game had ended and many supporters had understandably headed for the exits.

Botha was sent off on review for leading with his forearm into the head of Saracens replacement Nick Tompkins and Van Graan said: “I’ll have to go have a look at it again. Initial thoughts, he [Poite] definitely didn’t have any choice. Look, it happened so quickly, it was literally instinct. It was actually such a great carry but, unfortunately, if he’s made contact with the head; the referee doesn’t have any decision [but] to award a red card.”

“Obviously, he [Botha] feels bad about it. It happens in a split second. We’ll have a look at it and it was, unfortunately, the last play of the game, then it went to a lineout and I thought we handled that quite well.”

Botha will also, inevitably, face a disciplinary hearing with the possibility of a suspension.

“I don’t want to get into that, there’s people employed to do that job,” said Van Graan. “All I can do is focus on the things that we can control. It happens so quickly. There were other instances in this game where there were cleanouts and you know, the referee deemed that fair, you’ve just got to respect the decisions and move on.”

“He’s a world-class referee and you’ve got to stick with his decisions. I spoke to him after in the tunnel and it’s just the way sport goes. That’s why he’s one of the best in the world.”

Looking back on the game, O’Mahony said: “It was very difficult. They’re the kind of nights you almost don’t want to have the ball. It’s almost a liability it’s that bad. The score of the second half probably says it all. It was a game of defences.