Glasgow dreaming of quarter-finals after win in Montpellier 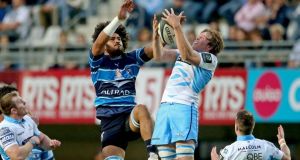 Gregor Townsend and his Glasgow Warriors took a giant leap towards the Champions Cup quarter-finals with a 15-13 triumph at his former club Montpellier.

The Altrad Stadium battle will go down in Scotstoun folklore as the Guinness Pro12 high-flyers claimed their second win on French soil in Europe’s premier competition.

Finn Russell produced a faultless kicking display with five penalties from five attempts to lead his side to glory.

Russell calmed Warriors nerves after two minutes with his first penalty of the evening after Kelian Galletier carelessly crashed into Tim Swinson while the Scotland secondrow was airborne.

The 22-year-old outhalf landed the confidence-boosting kick to give the visitors an early 3-0 lead.

Russell resumed kicking duties and extended his side’s lead to six after the hosts went offside to stop a flowing Glasgow move.

The Top 14 high-flyers sprung into action on the 15-minute mark and won a penalty which scrumhalf Benoit Paillaugue landed to cut the deficit to three.

Seymour collided with Sitaleki Timani during a sustained spell of Glasgow pressure but they could not muster a score.

The hosts marched back downfield and claimed their second three-pointer after the Warriors went in at the side to close the gap to 9-6 at the break.

The Scots survived a heavy spell of pressure before Mark Bennett set off on a mazy run. Robert Ebersohn was sin-binned for using his boot in the ruck after he was finally brought down.

Russell made it four from four on 60 minutes and struck again moments later to lead his side to glory.

Bath’s European Champions Cup quarter-final hopes suffered a severe blow at the Recreation Ground after they were undone by deadly Toulouse finishing.

After being crushed by Glasgow last weekend, Bath knew that any realistic hope of keeping themselves in the Pool Four qualification picture hinged them on flooring the French heavyweights.

But Toulouse had other ideas as tries by wing Vincent Clerc, flanker Imanol Harinordoquy and fullback Maxime Medard, plus conversions from England international Toby Flood (two) and Luke McAlister, secured a 21-19 success and left Bath with little chance of progressing.

Given Bath’s long injury list, especially in the backrow department, it represented a fine display in adversity.

Their only realistic hope of progressing, though, is to win the last four group games, but that schedule includes trips to Montpellier and Toulouse, suggesting the 1998 European champions will end up making an early exit.

George North’s quartet of tries reinvigorated Northampton’s European campaign, but the 34-6 victory over the Ospreys came at a cost with England centre Luther Burrell departing early through injury.

North struck twice in each half but saved the best for last, stripping the ball in the tackle, escaping down the left wing before chipping ahead and touching down over the whitewash.

The Wales star was crowned man of the match as Northampton celebrated the try-scoring bonus point that thrusts them back into contention in Pool Five of the Champions Cup, having lost at Racing Metro last weekend.

England head coach Stuart Lancaster will be anxiously awaiting news on Burrell, who was forced off in the 43rd minute with an injury to his right hand.

Burrell has been named in the squad for next month’s autumn Tests against New Zealand, South Africa, Samoa and Australia at Twickenham but his involvement is now in doubt.

England’s midfield resources have already been drained by the loss of Manu Tuilagi for the entire autumn series because of a groin injury, while Kyle Eastmond is struggling with a rib problem.

Lancaster can at least take comfort in strong performances from the remainder of his Northampton contingent with Tom Wood, Calum Clark and Lee Dickson impressing at Franklin’s Gardens.

It has been five years since the Ospreys have triumphed on the road in Europe and from the moment North crossed in the 17th minute that record looked safe.

Two penalties from Dan Biggar, who otherwise wasted nine points from the kicking tee, was all the injury-hit Guinness Pro12 leaders could muster.

Northampton became disjointed in the second half, but with outhalf Stephen Myler amassing 16 points without missing a kick, their ascendency was unchallenged.

Scarlets head coach Wayne Pivac paid tribute to the wholehearted effort of his side after they claimed the scalp of Leicester to open their European Champions Cup account at Parc y Scarlets.

Tries from wing Harry Robinson and man-of-the-match scrumhalf Aled Davies sealed a morale-boosting first Pool Three victory for the Welsh side, who had to overcome a series of injury setbacks throughout a bruising contest.

Pivac said after the 15-3 win: “It was hard-fought, it has been a big seven days for the boys and there are a lot of sore bodies in that changing room.

“We had a lot of guys going down with injuries so it was always going to be a big test of character for the group.

“That is why I am so pleased to come through and get the result and also to stop Leicester getting a losing bonus at the end, which is important. We couldn’t have asked for much more, to be honest.

“We were well aware that home games are vital. Going into it there was pressure to win this game, otherwise we would have been well behind the other two.

“The boys really wanted to win that one badly.”

Ulster now face the Scarlets in back to back games in Pool Three, starting with a home clash in Belfast on December 6th.