Craig Gilroy expects a bigger test from Scarlets in Wales 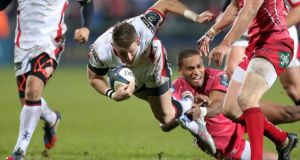 went on a charge up the right touchline.

Just as he thought there was a pathway opening, Craig Gilroy ghosted across, wrapped him up and bulldozed him into touch. The Ulster left wing is normally eye-catching for his balanced running but for a split-second seemed pleased that he could add muscle to a game based on pace and guile.

“It’s certainly something I’ve been working on. Defensively I took my foot off the gas against Munster which I was disappointed about. So I really wanted to come firing out of the blocks against Scarlets and put in a really good defensive performance,” he says.

“I’ve been working with Jonny Bell the last while and we went over the game and we were both really happy with it. It’s a good confidence booster and I was really happy to show that side of my game. I know I can be really physical in both attack and defence.”

Ulster’s requirements to get out of the pool continue to be too heaped for internationals like Gilroy to wonder how they are shaping up in the eyes of Joe Schmidt.

“I’d be lying if I said it wasn’t there because it obviously is,” he says. “But at the same time there’s almost too much to think about.”

Ulster faced Scarlets in Wales in the first match of the Pro12 season and drew 32-32, although just about everything has changed since then. They will have taken energy from the bonus point win in Belfast but Gilroy talks of the wounded Welsh with a note of caution in his voice. Ulster, essentially now in a ‘knockout’ phase in the pool stages, have to travel with a mix of ferocity and composure to keep Europe a live option after Christmas.

“They will have had a big week of disappointment. They will not want us to be able to play and come away with another win. We’ve won half the battle this week. After Saturday everybody was pretty happy but we know what we have to do. We’re not out of the fire yet.”

Ulster look around and use whatever they can for encouragement. They watched last week as Leicester beat reigning champions Toulon 25-21 at Welford Road and see it as another helpful pointer. That will give them some purchase for their trip to the south of France next year, if they can keep their interest alive until then. It’s all about piling up the little positive things.

“It’s certainly on thin ice almost,” he says of Ulster’s position in the tournament.

“You saw the result of Toulon and Leicester. It’s opened up ever so slightly, not a lot just a bit. Hopefully we can use that to our advantage.

“Saturday was great to get the bonus point. But if we want to have any more interest in Europe we have to stay calm.”

It will be the third time the two teams have played this season and there is a growing familiarity. But will Scarlets draw two yellow cards as they did in Belfast and will their tackling be so poor as to allow Ruan Pienaar waltz through, with home advantage and a passionate crowd. Probably not. Nor do Ulster expect that.