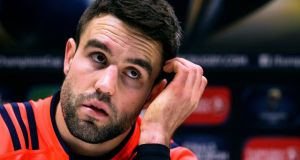 Munster scrumhalf Conor Murray believes he was specifically targeted by Glasgow Warriors in last weekend’s Champions Cup encounter and considers himself fortunate that he was not seriously injured.

The 27-year-old feels that Glasgow targeted his standing leg any time he kicked the ball.

The Irish international said he has no problem with “being rattled” in matches but is angry that Glasgow Warriors seemed to target his standing leg each time, and he alleged that it wasn’t the first time this had happened with the Scottish club.

His comments are sure to crank up the tension ahead of the opening game of the Six Nations between Scotland and Ireland at Murrayfield on February 4th just over two weeks, not least as Glasgow Warriors started with 15 Scottish internationals in last Saturday’s 14-12 loss to Munster.

Murray made no effort to hide his anger with Glasgow’s tactics when he spoke at a media briefing in UL on Wednesday.

“I’m properly pissed off about that. I don’t see any benefit in charging down someone’s standing leg, I only see it as a danger or as a potential to get injured.

“I don’t think it’s a good tactic. You could put another label on that type of tactic, but they did it to us at Thomond Park, they got our scrumhalf Te (Aihe Toma) with it in the league game and they almost got me a couple of times.

“I’m not blaming the players. I don’t know who told them to do it but it’s dangerous. It’s very dangerous and thankfully I didn’t get injured but if I had have been injured I would have been going on more of a rant.”

Murray said he had no problem with teams targeting him or any other player but he said he had not encountered another team aiming for the standing leg in that manner.

“No they’re the only team I’ve across that did it. I just can’t see a way of that being legal or any way that could lead to a charge down or a tackle. The ball is long gone from my hands and I just think it’s really dangerous and it will end up with someone getting properly injured by it. It could be a cruciate and you’re out for six to nine months and from an attempted ‘charge down’?

“I’ve no problem with teams going after you in a different way like happened in the game, but that type of tackle I just don’t think it’s fair. It’s not safe.”

Murray said he made the touch judge aware of it after the first hit by Glasgow number eight Josh Strauss in the opening quarter.

“There’s so much going on in the game that something like that needs to be just looked at outside the game before the game has even started, in the lead up to the game, and make sure things like that are outlawed in the game because, they have enough on their plate as well, but it is in the best interest of the players for something like that to be looked at,” added Murray, who is set to play against Racing 92 on Saturday after a neck and shoulder injury suffered against Glasgow became the subject of an EPCR probe into seeing if injury protocols were followed.

“I don’t think people should call it an enquiry. I think it is working together with the tournament organisers. The only thing they are trying to do is to make sure the HIA (head injury assessment) and the player welfare is getting better and better.

“I have been coaching now for more than 15 years you know and I think the medical team was spot on the way they did stuff. HIA only came in in 2012 and it will always be a system that is evolving so what the tournament organisers are trying to do is make sure that everybody adheres to that and is it the best protocol and did we do it the right way.

“I mean to be honest with you we even have an extra system called my play, a play system which we use next to the field where the medical staff can look at an incident after it happened on the field. So I think the guys were spot on and I think Conor is fit and ready to go. I don’t think enquiry is the right word, I think working together to improve player welfare is the actual phrase,” said Erasmus.

Meanwhile, he is confident that captain Peter O’Mahony (HIA), Simon Zebo (dead leg) and Tommy O’Donnell (ankle) will all be fit for Saturday’s clash with Racing 92, although winger Keith Earls is doubtful with a rib injury and may not be risked.

“It’s just a training accident, not a serious one and not a long-term one but next week the international window starts and you don’t want to jeopardise that, although this is a massive game for us but the next seven weeks are going to be massive for him,” added Erasmus.

4 Trump endorsement by Jack Nicklaus leads to avalanche of dismay