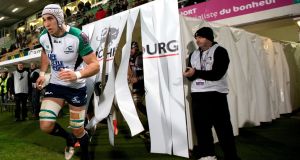 Careful now, the Six Nations is nearby. Surely it’s no coincidence that certain players named in Ireland’s extended squad are named in specific positions in the four European matches this weekend.

It matters to Connacht that the foursome called up for Ireland training in Carton House have some serious business to attend to.

Victory is essential if Pat Lam’s side are to qualify and a bonus point becomes a necessity should Brive win in Newcastle to top Pool 1.

Even then Connacht need favours from dead-rubber meetings elsewhere.

For Ultan Dillane this means so much more. He strides out at the Sportground this afternoon with the blank canvas of a Test match career, potentially, before his 6ft 6in, 105kg frame.

Those vital statistics, allied to his 22 years, certainly add up. There’s been plenty to enthuse about in his performances, and it looks like he has some grit too, but in the wake of Paul O’Connell’s retirement and Iain Henderson’s injury perhaps we expect too much too quickly. Mike McCarthy is having a confrontational, annoying and physically imposing season to rival any we have ever seen from the 34-year-old. It also looks like Rhys Ruddock is being considered as secondrow cover for February 7th against Wales. A patched-up Donnacha Ryan starts for Munster.

That’s the established guard. Dillane’s promotion and the desire to mould him into a Test lock is encouraging enough for now.

Bundee Aki will be on the cusp of becoming an abrasive Ireland centre this time next year. For now we have to be satisfied with the man who sent him scampering over for the try that secured a confidence-streaming victory over Munster two months ago.

Same game in which Robbie Henshaw broke his hand. But he’s back, just in time, and interestingly named at outside centre by Pat Lam, with Les Kiss picking Jared Payne at fullback again.

Maybe the idea is to get them on the field in positions that best suit their specific talent before reuniting the Irish 12-13 combination that was denied the chance to shine, or more importantly to block Los Pumas wide raids, at the World Cup.

Luke Fitzgerald is also wearing 13. Stuart McCloskey is rested by Ulster (so is the mildly injured Rory Best; bizarre selections by Kiss considering European qualification rests upon a comprehensive victory). Garry Ringrose is dropped by Leinster.

Maybe none of this has anything to do with Ireland. Who knows? All the world’s a stage and most of us are desperately unrehearsed.

What we suspect is Kieran Marmion is close to Six Nations exposure as understudy to Conor Murray, while Nathan White might just keep Leinster’s Marty Moore and Tadhg Furlong (also dropped) at bay. Connacht never registered Jake Heenan for Europe so they go to academy flanker James Connolly alongside Eoghan Masterson and John Muldoon. Much to Lam’s chagrin, last week’s last-gasp defeat away to Brive appears to have ended their interest in the Challenge Cup.

“That was probably our worst performance this season. Ill-discipline gave them easy points. It was just a game that we threw away really so we’re extremely disappointed.

“I am expecting a backlash. We should have been home and hosed, and already qualified. Again we have only got ourselves to blame – that’s the reason we have not qualified.”

It may prove a blessing in disguise and allow them hone in on the Pro12.

Judging from the manner in which Alan MacGinty guided Connacht past these Russian opponents deep in Siberia last November, a clean kill is all but assured.

1 Larry McCarthy to become first overseas president of the GAA
2 Ryan Baird scores a hat-trick as blue wave rolls over Glasgow
3 On healing and wild hurling: The re-education of Diarmuid Lyng
4 Jack Byrne puts on a show as Shamrock Rovers beat Dundalk
5 Business as usual for Ireland as October date looks likely for Italy game
Real news has value SUBSCRIBE