Connacht’s knack of winning tight games can see them through 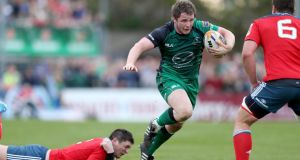 The return of Jason Harris-Wright at hooker for his debut this season is a welcome respite in a problem position for Connacht. Photograph: Dan Sheridan / Inpho

Pat Lam’s side have made an outstanding start to the season, displaying a grittiness, durability and self belief in the closing minutes of tight matches that for the most part in times past, appeared beyond them. They demonstrated this against Leinster, Edinburgh and Treviso to claim three victories by a combined total of five points.

The Connacht coach has made several changes in recognising the nature of the challenge that French Top 14 side La Rochelle will pose. The return of Jason Harris-Wright at hooker for his debut this season is a welcome respite in a problem position based on a unfortunate spate of injuries.

He is flanked by Ronan Loughney and Nathan White but such is Connacht’s depth in this area that Denis Buckley and Rodney Ah You are likely to pose as many problems for the opposing frontrow when introduced. Aly Muldowney makes a third start in the secondrow while Willie Faloon is fit enough to resume at openside flanker with Eoin McKeon shifting to his more natural position of number eight.

Behind the scrum, Danie Poolman’s greater physicality sees him earn a recall on the right wing with Niyi Adeolokun included among the replacements. Lam offered an insight into the composition of the team. “As people will see, we’ve backed up our desire to perform and compete in this European competition with a strong team selected.

“A bouncing Sportsground for our last home game for another five weeks would be a massive lift for us.”

La Rochelle, who have never been to Galway before, have three victories from nine matches in the Top 14 but two of those were impressive home wins over French goliaths Toulouse and Castres. They have mixed and matched a little in terms of their selection. The weather forecast suggests the visitors are going to find out just how inhospitable the Sportsground can be.

Just the ticket: There are still tickets available from €10 for Juveniles to €27.50 for terrace tickets.

5 Rory McIlroy positive about his return to Bay Hill