Anthony Foley to remain at Munster for another year 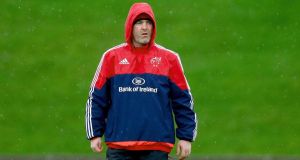 Munster coach Anthony Foley will remain at the province until the end of the 2016-17 season at least. Photograph: Donall Farmer/Inpho

In a striking statement of faith in their head coach at a time of difficulty after three defeats in a row, including a damaging loss to Leicester in the European Champions Cup last Saturday, Munster are set to take up the option of another year on Anthony Foley’s contract.

Foley signed a two-year deal to take over from Rob Penney in the summer of 2014, with the option of a third year, which The Irish Times has learned both the province and Foley have agreed to implement.

The son of the former Munster lock Brendan Foley, and steeped in the ways of Munster rugby, Foley had a distinguished 14-year career with his native province, playing over 200 times for them and captaining them to their first Heineken Cup triumph when beating Biarritz at the Millennium Stadium in 2008.

Foley retired after their second Heineken Cup success in 2008 and immediately stepped into coaching. For three years he combined the roles of Munster defence coach and coached their A side, also teaming up with Eric Elwood to coach the Irish Wolfhounds for several seasons, before becoming the province’s forwards coach in 2011.

He also stepped in as Ireland’s forwards coach for the 2012 Six Nations as a replacement for Gert Smal. After serving as Munster’s forwards coach for over three seasons, he was declared as “the stand-out candidate” by the Munster CEO Garrett Fitzgerald to succeed Penney when the province decided not to take up the option of a third year on the Kiwi’s contract.

In what is undoubtedly a trying and transitional time for the province, the last vestiges of Munster’s golden generation have either retired (one after the other in Ronan O’Gara and Paul O’Connell) or moved on (Donncha O’Callaghan and James Coughlan) under Foley’s watch. This has left only Denis Hurley, Tomás O’Leary and Keith Earls as playing links from the 2008 triumph.

Foley has assembled an indigenous coaching ticket of former team-mates on his coaching staff, and despite exiting the Champions Cup at the group stages last season, they reached the Guinness Pro12 final. They were soundly beaten in the decider at the Kingspan Stadium by Glasgow, when the absence of Conor Murray hit hard.

Last Saturday’s defeat hinged on several mistakes and decisions by Romain Poite which served as huge momentum shifts, and imperilled Munster’s chances of progressing to the knock-out stages for the second season running.

Realistically, they need a win in the return match at Welford Road on Sunday which, would, in turn put them right back in the mix. But either way, Munster are standing by their man.