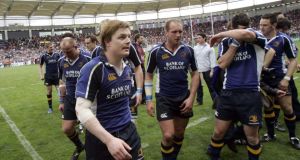 Brian O’Driscoll walks off with his teammates after beating Toulouse away from home in the 2006 Heineken Cup quarter-final. Photograph: Billy Stickland/Inpho

With Toulon currently the Everest of European rugby, Leinster’s evolution in France sees them attempt to scale the highest peak tomorrow. It’s also the last time Brian O’Driscoll will lace his boots in that country. So this could be the bitter end.

O’Driscoll’s first Leinster match in France was a 39-6 defeat to Stade Francais way back in December 1999 (Post-Lens but before his glorious Parisian spring). But Leinster leatherings go further back. It took seven European ties before victory was dug out of French soil.

Victor Costello remembers these early sorties, starting with an unforgiving 38-19 defeat to Toulouse in October 1997. “It was a time when we lost heavily but also a time when friendships were forged for life,” said Costello. “My Dad had died on the Monday and I remember Rollers [Alain Rolland] stayed behind and flew over with me.

“It was a big game for me. We had the passion, the will, just not the skill and technical ability. It was before Jayo Cowman [Leinster fitness and conditioning coach] so we always stayed with them until the last 20 minutes. It was also before Brian and the others came along. That was when it changed. Denis Hickie, Shane Horgan and Drico were guys who could see things as they happened.”

Maybe the Leinster backrowers contemplated this week and the repercussions, of albeit lucrative decisions, in the short term. “Playing with your friends definitely matters,” said Eoin O’Malley, O’Driscoll’s proposed heir until forced into premature retirement this season, aged just 25.

“Leinster is a club where everyone knows each other. Not just the players and the staff but everyone’s families know each other. If I was a player and saw another guy being treated as I have been – when I was useless to the team – I’d be thinking this is a great club to be at.”

Of the breakthrough scalp, against Montferrand in December 2002, Costello said: “That was the game when [David Bory] landed on Darce’s back, injuring him badly, as he scored the try. The return in Donnybrook was even more of a dog fight.”

Then, in December 2004, O’Driscoll produced arguably his greatest ever try to earn a stunning late reprieve at the Stade Pierre Rajon. A week previous Bourgoin insulted the tournament by sending their kids to Lansdowne Road for a 92-17 shellacking. A return mugging looked to be the case until Leinster got a lineout near the home 22 with less than four minutes remaining. What followed was astonishing.

Clean lineout ball allowed David Howell to find O’Driscoll in midfield and in a sliver of space he stepped inside the first defender before gliding outside the other. That alone seemed impossible, especially with a flailing third French body unable to lay a finger on him as time seemed to enter Matrix style pace. His trademark inside swerve made the fullback look foolish and everything accelerate as a fifth should-be tackler went over the line with him. Howell converted and Leinster won 26-23.

“I’ll never forget what Brian said to me after that game,” goes Costello. “I was wondering how he got through their midfield so I asked him. He said, ‘The 12 was leaving a gap on his inside shoulder all game.’ He saw that while we were thinking ‘F*** this, nothing is working.’ When the chance came, in practically the last play of the game, he took it. Sounds simple but all these years later I remember that answer because it made such a dent on my life.

“Nobody wanted Brian to be saving us all the time. In this case I’m not sure if it saved us or set us up for what came next.”

Costello and Shane Jennings were infamously dropped by Declan Kidney for the home quarter-final defeat to Leicester.

Everything seemed to change after the Heineken Cup quarter-final victory at Toulouse’s Le Stadium in 2006.

“Maybe [we were] going into the game a little bit naïve, a little bit innocent about it, and coming home thinking this was pretty standard going over to France and winning in Toulouse’s back garden,” said Jamie Heaslip, a radically different number eight to Costello. “I suppose it got rid of a lot of fear, if any of that was there.”

Revolutionary years
Michael Cheika’s era didn’t have another major win in France, en route to capturing the province’s first European title in 2009. Cian Healy in particular received a hugely valuable lesson during the 2010 semi-final defeat back in Toulouse. Cheika departed, after a revolutionary five years in terms of attitude, and Joe Schmidt arrived to mould Leinster into the three star powerhouse of European rugby.

But the watershed moment, of their evolution in France, seemed to be a defeat and without an injured O’Driscoll. It was December 2010 and O’Malley was outside centre at the still impenetrable Stade Marcel Michelin.

It was a thunderous affair with Aurélien Rougerie breaking through early on. Otherwise the line held with Rougerie cracking O’Malley’s ribs late on but the perceived weakness never materialised. That’s because weakness was no longer transparent in the Leinster squad. “I remember Joe talking to me a day or two later, when I was still hoping to play [the return leg] and he said I did great besides one or two issues in the last 10 minutes which were poor.

“I remember thinking, ‘he knows I broke my ribs!’ but that doesn’t really roll with Joe.”

The word “excuse” isn’t part of his lexicon? “Not really. He obviously knew it but he doesn’t let you have an excuse and you don’t bother bringing it up. You don’t want to be the fella whinging about your ribs.”

The losing bonus point seemed proved almost as good as victory. “It didn’t feel like a victory. On the bus afterwards there were a lot of lads around me in bits, and I was wondering how are we going to go up against these lads in a week? It’s amazing what those few days can do. Monday lads still looked shook, carrying knocks but the lads pulled out an unbelievable performance.”

A week later at the Aviva Leinster dumped Clermont out with some serious power play from Seán O’Brien, Nathan Hines and Cian Healy. Belief surged through the Leinster ranks but O’Driscoll was no longer the primary weapon.

“You could feel it building that year,” O’Malley went on. “We lost three of our first four games but we had a feeling that what he had us doing would come together . . . Sexto loved the whole game plan under Joe. He likes to run when it’s on and if you can justify why you did it, even if it goes wrong, you are still right not to kick the leather off it. You back yourself.”

With no Schmidt, Sexton, Isa Nacewa or O’Brien tomorrow the concern is whether the Leinster machine can still function at this altitude. Victory at Racing Metro followed in 2011 and then a hugely satisfying draw in Montpelier, again, without O’Driscoll. “I was subbing and Ferg [McFaddden] was at 13 that day and he did his MCL but kept going for the whole second half. I kept thinking he’d be gone in five minutes but he was playing too well to come off.”

Resilience
The greatest French scalp of all was attained in a remarkable show of resilience under a searing Bordeaux sun in April 2012.

The Schmidt playbook was on full view for that semi-final against Clermont. For Cian Healy’s try that day see Rob Kearney’s identical twin at Twickenham in February. But they rode their luck. Kearney’s drop goal helped as did Wesley Fofana’s disallowed try at the death.

D’Arcy shifted to 13 for last season’s narrow loss in Clermont but as, O’Malley notes, O’Driscoll’s successor will not have such a quality foil for much longer. “Whoever it is they won’t have Darce inside them forever either.”

The list of candidates is already established but Costello feels, regardless of what happens tomorrow or whoever comes next, the work O’Driscoll did to bridge the gap between old Leinster and the current dynasty is his greatest achievement. “Brian set the tone for everyone around him since 1999. The mantra in Leinster was, ‘Wearing the jersey wasn’t good enough you have to win in the jersey.’

“A young guy like Jordi Murphy is there now, and hopefully he will be in 10 years time, when he will remember his early years training and playing alongside Brian O’Driscoll.

“He can turn around to a young kid and go, ‘This is how O’Driscoll trained. This is the standard he expected of me and that’s what I now expect of you.’”