Kilkenny took advantage of conditions early on in Portarlington 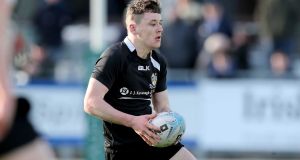 Reigning champions Cistercian Roscrea could call upon seven of the team that claimed the historic victory last year in their straightforward victory over Kilkenny College at Lea Road, Portarlington yesterday

Kilkenny played with the assistance of a strong breeze in blizzard like conditions in the opening half and took the lead after five minutes with a drop goal from outhalf Joshua Miller before Alan Tynan, despite kicking into the teeth of a gale, landed the levelling score after eight minutes.

Roscrea were getting on top all over the field but Kilkenny still held the lead after 35 minutes but in the first minute of injury time a great Roscrea move resulted in Michael Milne going over in the corner for the game’s opening try and, with Tynan adding the conversion, the champions went to the break leading 10-6.

Kilkenny worked hard to get back into contention but Roscrea were so well on top they were able to ring the changes in the final quarter.

Their final try arrived in the 75th minute when, after much pressure and a lineout ten metres from the line, Vinny Wycherley touched down with Tynan missing the extras.