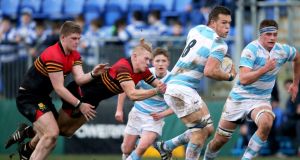 
Tries in either half by number eight David O’Connor set the foundations in Donnybrook yesterday afternoon, as Blackrock College got the defence of their Leinster Senior Cup crown off to a perfect start with a commanding victory over CBC Monkstown.

Some heroic CBC defending ensured the Blackrock attack was kept at bay initially, but the resistance of their determined opponents was eventually broken after 13 minutes, when O’Connor touching down underneath the posts.

Outhalf Sean Kearns supplied the bonuses on offer and, thanks to his successful close-range penalty five minutes later, ’Rock had sent out a firm statement of intent.

A persistent Monkstown finally opened their account with a three-point effort of their own by fullback Mahon on 19 minutes, but the holders now had a full measure of their south Dublin rivals, and it came as no surprise when captain Nick Timoney scored a try nine minutes before the break.

Struggling to cope
Having displayed plenty of promise early on, CBC were now struggling to cope with the pace and power of ’Rock, and a third converted try from lock Cian O’Dwyer in first-half stoppage time provided the 67-time champions with an unassailable 24-3 cushion at the midway point.

Upon the resumption ’Rock continued to press and O’Connor’s second try 13 minutes into the half to further enhance their superiority.

As we moved into the final-quarter of action, Monkstown battled admirably to secure some form of consolation from the game, and thanks to some fine probing but Blackrock’s s rearguard remained resolute until the very end and they were clearly aware of the dangers that come with complacency.

Tottenham’s Son Heung-min to start mandatory military service in S Korea 17:31
Irish racing would need no more than 10 days to start up again 17:27
Postponed 2020 US Masters rescheduled for November 16:31
Pep Guardiola’s mother dies of coronavirus aged 82 15:45
July’s British Open at Royal St George’s is cancelled 16:32
Here is your handy guide to sport on television this week