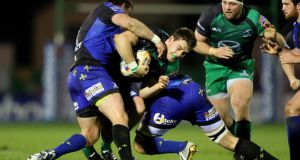 Connacht’s Jake Heenan will be back in action against Zebre. Photograph: James Crombie/Inpho

Connacht coach Pat Lam has made just two personnel changes to his side ahead of their Heineken Cup clash with Zebre in Galway on Saturday (3.40pm).

Both changes come in the pack where 21-year-old Jake Heenan’s return to the backrow on the openside, prompts something of a reshuffle in the ansence of the injured captain Craig Clarke.

John Muldoon will captain the side and revert to the more familiar terrain of the blindside, having covered for Heenan last week against Leinster, while Andrew Browne returns to the secondrow after filling in on the backrow in the 16-8 defeat.

Hooker Seán Henry also comes back in, having last featured against Toulouse in this competition on December 14th. Jason Harris-Wright makes way.

“It’s no secret that we were frustrated with the manner in which we lost the game last week,” said Pat Lam today, referring to some seemignly key decisions that did not go the homeside’s way.

“ But as everyone saw, there were some positives from that game, including the encouraging performances from our young back line. We have decided to retain this selection for the game against Zebre – another huge challenge.

“This is Jack’s first taste of Heineken Cup rugby and also a first start for young Darragh (Leader) in the competition. It’s another big boost to their development as young Irish and Connacht-born players.

On the returning duo up front, Lam added: “It’s fantastic to welcome back Jake (Heenan) and Sean (Henry) to the match day XV. It’s a long season and the last numbers of games have been extremely physical, taking its toll on some of our players.

“We’ve had to plan without Craig (Clarke) this week but getting some players back from injury has meant we have the strength and depth to make the necessary changes.

“There’s a huge sense of anticipation around this game. We’re still alive in Europe but we need to make sure we are focused this week and do everything we can to get a good win at home against Zebre. We are not underestimating them. They are a team that have been improving with every game and they deserved their win against Treviso last week. They’ll be coming here full of confidence looking for their first ever win in the Heineken Cup.

“With the support of the special Sportsground crowd, it would be fantastic to do it this week against Zebre and then hopefully go further in the competition.”