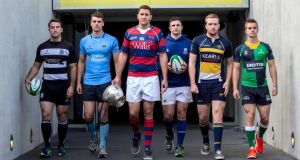 The Ulster Bank League has assured itself a fitting climax in line with all the other leagues in the world by reintroducing the concept of play-offs, and the IRFU yesterday announced that the final will return to Lansdowne Road on Saturday, May 9th, for the first time since the last of four successive finals there in 2006.

IRFU president Louis Magee formally announced this decision at the Aviva yesterday, along with the agreed decision to cease payment to players.

Current champions Clontarf lost the first and last of those finals, by 28-18 to Ballymena in 2003, and by 30-3 to a rampant Shannon in 2006. Yet despite finally reaching their holy grail of a first league title last season by simply finishing first, and having painful memories of the 2006 decider as a player, Clontarf head coach Andy Wood welcomed the return of play-offs.

“From a personal perspective I always liked the play-offs,” said Wood, who added that it gave coaches a little leeway to make more use of their squads, even if they didn’t provide the fondest of memories for Clontarf.

“That’s another challenge, for the players as well. Clontarf has never gone through the play-off system and won the league so I guess that’s a separate side issue as well.”

“I think the lads enjoy playing here. Obviously if we meet Lansdowne it would be a home game for them, but outside of that, getting into the play-offs with a home semi-final would be the objective, and from there you’d be delighted to play anywhere.”

Clontarf anticipate that some of their young tyros – Tadhg Furlong, Mick McGrath and Bryan Byrne in Leinster and Mick Kearney in Connacht – will be more involved with their provinces, while Max McFarland was signed by Edinburgh, and they’ve seen the likes of Darragh Fitzpatrick, Cian Culiton and Brendan Cutriss retire.

The League is having its earliest start in aeons, with UCD hosting St Mary’s next Friday, while Garryowen meet Shannon in a Division 1B derby. It would be no surprise if, say, Clontarf, Old Belvedere, Lansdowne and St Mary’s occupied the top four slots, and it’s a measure of the shift in rugby’s balance of power in recent years that Young Munster, whom Clontarf host on Saturday’s opening round of matches, are the only Limerick side in Division 1A.

“They are firing on all cylinders, and the first game is always a tough one,” said Wood. “There is so much quality, so many Leinster teams and to be honest Ballynahinch could be a dark horse.

“I couldn’t pick one particular threat, I know it’s a cliché but I think anybody could beat anyone on their day.”

In addition to the return of play-offs in the top flight, the league is being restructured from four divisions into five divisions of 10 teams apiece who will play home and away for the 2015-16 season: Div 1A, Div 1B, Div 2A, Div 2B and Div 2C.