Cistercian College Roscrea grab history and cup with both hands 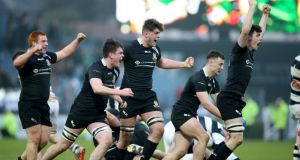 Title number one. Cistercian College, Roscrea, they who dwell 250 yards inside the Offaly border with north Tipperary, powered their way to the Leinster Schools senior cup in front of a crowd of 7,950 at the RDS.

It was deserved, if a little jittery, as this well coached band of brothers brought a three-year odyssey to its fitting conclusion.

The Navan teenager shredded Roscrea’s short side defence after just eight minutes to put winger Seán Long over. The execution was coldly accurate as number eight Tom de Jongh picked off a wheeling scrum, fed O’Sullivan who dashed between two defenders before a perfect left to right pass.

In a second half change by Belvedere coach Phil Werahiko, O’Sullivan ended up at fullback. This seemed like a tactical error, that is, until we saw what Gregory O’Kelly could do from the base.

Roscrea were all over the place in the opening half hour, making at least three uncharacteristic handling errors as everything seemed a little rushed. That was until outhalf Alan Tynan calmed matters when clipping the ball over Belvedere’s rushing defensive line to force a five-metre scrum.

Just as he did against Newbridge in the semi-final replay.

Tim Foley had already landed a penalty and while he missed that two-pointer his 75 per cent conversion rate was a dramatic improvement from this year’s winning captain. It mattered.

Belvedere, however, squared matters by half-time with a Jennings penalty that seemed ridiculously harsh on Roscrea. There was at least three Belvedere players off their feet at the ruck but referee Dudley Phillips saw it differently from point-blank range.

Belvedere, rank outsiders this season, but with most of their players returning in 2016, sensed their rare opportunity. Flanker Jess Iredale made four rumbling carries around another Jennings penalty that put them 11-8 ahead.

That was when Roscrea, as a collective, refused to lose just their fourth ever final appearance. They are a well coached side by Pieter Swanepoel, maintaining an impressive shape under pressure which ensured their most damaging carriers – Trayers, props Liam Walsh and Dylan Murphy, Fineen Wycherley– took ball to the line to create space for the backs to exploit.

Also, Mattie Keane, their openside, had another huge game before injury forced him ashore.

Daniel Keane’s try on 47 minutes essentially settled the contest. It came off a slick skip pass by Foley to the game’s outstanding runner, fullback Tim Carroll, who deftly drew the last Belvedere defender before putting his winger over.

Foley converted and added a penalty on 55 minutes.

That was the last score but it shouldn’t have been. With three minutes remaining Belvedere, brave to the end, broke clear via a careering O’Kelly. His offload went to ground but Kearney scooped it up and was mere inches from the whitewash when felled by Brian Diffley’s heroic hand trip.

The only stain on this captivating contest was the heavy handed work of match stewards as Roscrea fans attempted to get on the field afterwards. Leinster argued they are tenants at the RDS and avoiding injury was their main aim. A few young men, trying to embrace friends as the Roscrea team ran towards them, will have bruises this morning though. It all felt avoidable but insurance premiums dictate that the pitch invasions are seemingly a thing of the past.

That and the always condescending Public Address announcer demanding the crowd heed his every word stuck in the craw.

But it won’t have a long-lasting impact on Roscrea’s rapid ascent to the top of Leinster schools rugby. Not that this an overnight success.

They reached the 2011 final, losing heavily to an excellent Clongowes Wood side, while survivors from the 2013 semi-final played key roles here.

Men like Carroll, Rob Wharton and of course Trayers. Without the big number eight Roscrea wouldn’t have beaten Blackrock or Belvedere. Every player contributed when squeezing past Newbridge.

All cup winners know it is the sum of the parts that always matters. Sure, Diffley was only playing because of injury to Simon Meagher.

The champions sang ‘Stand By Me’ on the pitch afterwards. Fitting.