Cian Kelleher brought into Under-20 team to face Wales 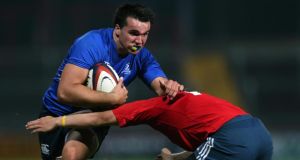 Cian Kelleher: Leinster wing comes in as only change to team that beat Scotland. Photograph: Inpho.

Coach Mike Ruddock makes just one change to the side that defeated Scotland in the opening match of the U20 Six Nations Championship with Cian Kelleher on to the wing in place of Adam Byrne for this week’s game against Wales in Dubarry Park.

Man of the Match against Scotland, number eight Jack O’Donoghue, has recovered from a knock he took in the match. O’Donoghue who scored twice against the Scots, again links up with fellow try scorer Peadar Timmins and team captain Dan Leavy.