BJ Botha and Denis Hurley among five released by Munster

Ulster confirm Tommy Bowe will not return to action this season 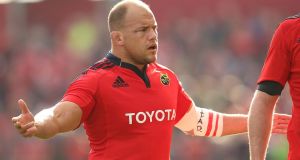 Munster have confirmed the departure of five players including long-serving South African prop BJ Botha and centre Denis Hurley, who played in the province’s European Cup win in 2008 and went on to win one Ireland cap against the United States back in 2009.

A product of the Munster Academy, Hurley made his debut for the province against Llanelli Scarlets at Stradey Park in May 2006 and departs as the most capped player among the present squad, with 166 appearances and 16 tries to his name.

Injury has curtailed the 36-year-old’s season, his last appearance coming in the European defeat away to Stade Francais at the start of January when he ruptured an ACL.

Sligo native Sheridan, 27, made 35 appearances since making his debut in February 2013, while Van den Heever scored six tries in 29 appearances after joining in the province in November 2013. Buckley spent two seasons with the senior set-up after graduating from the Academy, playing eight Pro 12 games.

Jordan Coghlan is also leaving Munster, having signed a deal to move to Nottingham Rugby.

Meanwhile, Ulster have confirmed that international winger Tommy Bowe will not return until next season after having undergone exploratory arthroscopy of his right knee to address discomfort he has been experiencing since the win over Zebre in mid-April. The surgery revealed no new injury and the 32-year-old is expected to be fully fit for the start of pre-season.

The province also confirmed that South African fullback Louis Ludik will have surgery in England on Thursday for a persistent groin pain.