Lansdowne just one point behind ’Nure after hammering Dolphin away 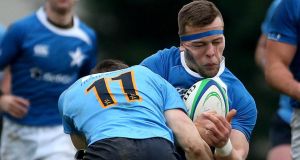 Ulster Bank League round-up: Terenure College were stunned into submission by Ballynahinch this afternoon as the Division 1A leaders were beaten 14-10 at a wet and windy Ballymacarn Park.

Terenure’s lead at the top has been cut to just a single point, but head coach James Blaney will not be too concerned as they still have a 10-point buffer over third-placed Cork Constitution entering the second half of the regular season.

The race to reach the play-offs is certainly picking up pace, with ’Nure’s stumble up north giving their chasers renewed hope as thoughts turn to the tenth and final round before Christmas on December 19th-20th.

Ballynahinch had the benefit of a strong wind behind them in the first half and centre Richard Reaney nailed two penalty attempts inside the opening 23 minutes to have them 6-0 ahead.

Right winger James O’Donoghue responded for ’Nure just moments later, scoring a try which Mark O’Neill converted, but their Co Down hosts edged back in front for the break thanks to Reaney’s third successful kick.

Given that the conditions would be in ’Nure’s favour in the second period, they still looked well-placed to pick up the match points – especially after Mark O’Neill fired over an early penalty for a 10-9 scoreline.

However, man of the moment Reaney ran in an intercept try in the 48th minute to rock the Dubliners back on their heels and a dogged, disciplined defensive display from ’Hinch over the remainder saw them run out deserving winners.

Lansdowne got the win they required to keep the heat on table toppers Terenure, but they did not have it all their own way away to Dolphin.

Mike Ruddock’s men were 37-6 winners over Dolphin in September’s opening round and would have been hoping to push for a bonus point against the division’s bottom side again today.

Nonetheless, a number of British & Irish Cup call-ups left them short of some key backs and they had to hang tough to record a 13-6 triumph in the end, with their captain Ron Boucher forced off through injury.

Two Barry Keeshan penalties had Dolphin leading 6-3 at the turnaround, but the visitors levelled through Scott Deasy in the 48th minute and a penalty try in the closing stages, which the home crowd felt was dubious, proved to be the match winner for Lansdowne.

Cork Constitution’s resurgence continued as they rose to third in the table on the back of a thrilling 18-17 triumph over a determined Old Belvedere side.

Munster under-20 starlet Tomás Quinlan was the toast of Temple Hill after his drop goal in the last play saw Constitution prevail in dramatic circumstances.

That was Cork Con’s only score of the second half having led 15-11 at the interval. A 19th-minute try from centre Michael Keyes was supplemented by a penalty try and five points from Darragh Lyons’s boot.

’Belvo were 15-3 adrift at one stage, but fullback Daniel Riordan’s fourth try of the league campaign sparked their revival. Josh Glynn, their razor-sharp goal-kicker, landed penalties over 58 and 69 minutes to nudge the Dublin 4 outfit ahead at 17-15.

However, the talented Quinlan managed to have the final say for Cork Con as they stretched their unbeaten run to four matches.

After drawing with Cork Con last time out, UCD got back to winning ways by beating St Mary’s College 25-17 at Templeville Road. Ireland under-20 out-half Ross Byrne scored 15 points – a try, two conversions and two penalties – with Shane Grannell and Garry Ringrose also touching down for the students.

St Mary’s had been on course for their third victory on the trot, leading 17-11 thanks to well-taken tries from Marcus O’Driscoll and Nick Timoney, but they endured a poor final quarter as Bobby Byrne’s charges came from behind.

The Cookiesmade the best possible start when centre and man-of-the-match O’Keeffe notched his opening try after just three minutes, which Ben Martin converted.

Number 8 Tony Ryan’s converted effort in the eighth minute had ’Tarf level and the north Dubliners edged ahead for half-time – 14-10 – thanks to a second seven-pointer from under-20 winger Anthony McGivney.

Martin’s second successful penalty left only a point between the sides but when Clontarf outhalf David Joyce was on target again, it looked to have clinched the result for Andy Wood’s charges.

Young Munster struck late on, though, laying siege to the ’Tarf line and their efforts were rewarded when O’Keeffe squeezed over at the end of a closely-contested affair.