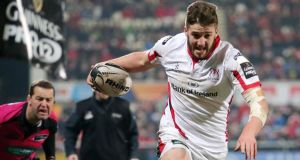 Ulster centre Stuart McCloskey could turn out to be a bolter for Ireland’s World Cup squad. Photograph: Darren Kidd/Presseye/Inpho

For the third year in succession an Emerging Ireland squad will head for Eastern Europe in early summer to compete in a tournament that at face value represents a pathway for young players to gain international experience.

Quantifying the benefits for those involved is not an exact science even from year to year because the standard of the matches and the quality of the opposition can vary greatly. What can be said is the majority of those travelling to Georgia next month to compete in the Tbilisi Cup will be peripheral figures in the battle for World Cup places.

That’s not to say that one or two won’t bridge the gap from what is essentially Ireland’s third tier team into Joe Schmidt’s plans but there are other factors to calculate including the mathematics of end-of-season holiday time and a start date for pre-season.

The Emerging Ireland squad will compete in a tournament that takes place from June 13th to 21st and when the players return they will be entitled to up to four weeks off, so several mightn’t begin their pre-season until late July, some weeks after elite Irish players.

Donnacha Ryan hasn’t been included in the squad despite having a season severely disrupted by injury. It’s more important that he starts pre-season at the same time as the main Ireland squad players with a view to being available for the World Cup warm-up matches than it is to provide him with additional game time this season.

Ryan will hopefully get enough game time with Munster before this season ends. I remember my own experiences in 2006 when I tore a cruciate ligament in my knee. I worked hard to get back in time for the end of that season and eventually ended up on the bench when Munster won the Heineken Cup final for the first time in the Millennium stadium.

I was able to put that issue to bed by coming back towards the tail end of the season and it meant that I could go into the following pre-season in a positive frame of mind. My sole focus at that point was to work as hard as I could to be a fitter and stronger player. There was no coincidence that I had one of my best seasons in 2007-2008.

Ryan is in a similar situation, as is someone like Ulster’s Chris Henry. There’s enough left in the present campaign for them to reinforce their match sharpness without having to extend it further.

That’s not the case for Rhys Ruddock, who has been named in the Emerging Ireland squad. His season has been fractured by a broken arm that required surgery and a plate installed. The injury didn’t heal in the anticipated manner and he needed a second operation. The nature of the issue meant that he would still have been able to do aerobic work but the fact that Leinster are not in the league mix denies him a competitive outlet.

It’s why Schmidt may have decided that sending him to the Tbilisi Cup – he was there in 2013 – is a worthwhile exercise in his case; giving Ruddock game time and being able to allay any lingering fears from the player’s perspective about his arm. Ruddock is a strong contender for the World Cup squad, all things being equal.

Bolter There are several others like Munster props James Cronin and Stephen Archer and Ulster hooker Rob Herring, capped at senior level, who will travel to Georgia with a point to prove.

But another player, Ulster centre Stuart McCloskey, could yet be a bolter for the World Cup.

Schmidt has plenty of options for wing, fullback and halfbacks but the one area where there is less obvious depth is at centre and particularly at 12. Who would fill in if Robbie Henshaw was to pick up an injury?

The 6ft 4in McCloskey has impressed me, particularly when coming on in the Munster match. He’s strong, carries and tackles powerfully and has good feet. If he can impress in Georgia, then he’s asking the question. At that other end of the scale in terms of experience, it’s good to see players like Cian Kelleher, Rory Scannell, Frankie Taggart, Dan Leavy and Eoghan Masterson, to highlight a few, being given an opportunity. Touring and tournaments establishes how well players mix in and cope with a short, intense, pressure-laden environment.

The calibre of opposition next month will be demanding. Georgia and Uruguay – Emerging Italy are the third team in the tournament – will be using the Tbilisi Cup as part of their preparations for the upcoming World Cup.

If the hosts have their French-based players available, then Ireland are going to face a proper test in several facets of the game.

There is an element of box-ticking for the IRFU is sending Emerging Ireland squads to compete in the Tbilisi Cup (2013, 2015) and last year’s Nations Cup in Romania in honouring a commitment to the sport’s governing body, World Rugby, to help strengthen and develop the global game.

When the union looks for support in their candidacy to host the 2023 World Cup, playing in tournaments of this nature won’t do them any harm.

But it would be wrong to suggest that it’s just a philanthropic rugby exercise. The 2013 Emerging Ireland squad contained players like Ruddock (already capped), Dave Kearney, Marty Moore, Jack McGrath, Ian Keatley (already capped), Jordi Murphy and Dave Foley, all of whom used it as a stepping stone to senior honours.

If Schmidt can draw down five or six players to contend for places in the senior squad over the next couple of seasons, then the Emerging Ireland team has a role to play. In some respects, Ireland benefits in the medium term, while the provinces get the short-term boost from returning players who have been exposed to a testing arena that is a step up physically from age-grade internationals.

Players must approach the Tbilisi Cup with the same dedication and determination that they would bring to their daily training regimen and match preparation. It should be embraced as an opportunity not a dead end.

A worthwhile exercise for any player who thinks otherwise would be to go back and look through the history of Ireland World Cup squads and note the players who made the journey from peripheral figure to participant.

Schmidt will name an extended Ireland training squad for the World Cup in late June; that’s after the Tbilisi Cup, so maybe he’s got a little bit of Georgia on his mind.

1 Betting shops face uncertain future as they prepare for Monday reopening
2 Tianna Bartoletta: ‘After you’ve gotten your medal, you become black in America again’
3 Timo Werner giving up on Liverpool dream on path to being truly wanted
4 Ian O’Riordan: An education in race and running during college days in America
5 Sports bodies must keep electronic records of participants as training sessions resume
Real news has value SUBSCRIBE