A cruel twist for Connacht closes an epic encounter 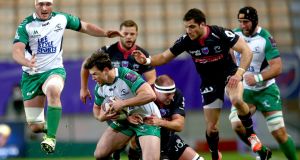 Connacht didn’t deserve such a cruel final twist, but after an epic encounter which ebbed and flowed from first to last, a 76th minute drop goal by Jonathan Wisniewski, who scored 23 points, steered Grenoble to a dramatic European Challenge Cup quarter-final win.

Connacht thus missed out on a home semi-final in two weeks time despite outscoring their equally ambitious hosts by four tries to three. They and their travelling supporters saluted each other at the end of a memorable night.

There have been few, if any, better games to behold this seson, and it left the 14,877 crowd - who grew and grew in volume as this cracking encounter unfolded - breathless.

Under Pat Lam, the ball has become every Connacht players best friend, and Bernard Jackman and co have instilled something very similar at Grenoble.

True to type and to their coaches avowed promises, it was high octane, high risk stuff from first to last; it was flawed and it was thrilling. You couldn’t take your eyes off it. Injury stoppages were almost a relief. There was more entertaining rugby in the first 20 minutes than in most 80 minute games this season.

Stade des Alpes - overlooked, by, you guessed it - throbbed before kick-off, chants of “Ici, ici, c’est Grenoble” occasionally abating to the first strains of The Fields from the estimated 500-600 Green Army. And on a perfect night for rugby, cool but completely still and on a billiard-like playing top, two sides well coached and versed in the art of keeping the ball in hand simply let rip from the off.

Inside the first hectic ten minutes, Connacht had declared their intentions off a turnover by Henshaw inside their own 22 which O’Brien moved on before they came back left to release Danie Poolman up the left. He in turn offloaded inside to Aki, and although Gio Aplon made the tackle and Lucas Dupon won the turnover penalty, the die had been cast.

On ten minutes, Connacht struck stealthily, again using the full width of the pitch. Kieron Marmion cleverly linked with Poolman when moving left, and when the two halves stretched play to the right, Aki’s fumble lured Aplon into attempting the intercept before the centre’s looped pass found Healy. Accelerating into the ensuing gap, he left defenders trailing before putting Niyi Adeolokun over with the left to right try-scoring pass for the winger to round the posts.

After Aplon messed up a try-scoring pass to Dupont from Charl McLeod’s tap penalty under the posts, the scrum-half’s outrageous offload was adjudged forward before Wisniewski’s one-handed tap back led to , Mahamadou Diaby touching down in the corner. Compensation for Grenoble came by way of Wisniewski’s penalty.

Undeterred, Connacht promptly struck again. Healy initiated the move with a stunning counter when, seemingly with nowhere to go, he skinned Tino Nemani and found Marmion in support. His footwork kept the move alive, Muldoon and the calry arriving in support, before Shane O’Leary - once of this parish - calmly picked out Henshaw for the cross kick and the try.

The Fields was given its jauntiest rendition yet.

But arguably even better followed in a set-piece strike move straight off the training ground. James Connolly, promoted to the starting line-up the night before after Eoin McKeon was ruled out of the trip through a chest infection, peeled off a line-out and fed Marmion, he ran laterally and passed to O’Leary, who used runners either side as decoys before finding Marmion on the loop, and the outstanding Healy left Nemani and another defender on the deck with one sway and step at pace before again putting Adeolokun over. O’Leary’s touchline conversion made it 19-13.

Back came Grenoble though, helped as they were by O’Leary attempting a cross kick for Adeolokun from virtually his own line which went directly into touch. Although the Connacht forwards again re-grouped to halt a well set-up maul for a third time, a few phases later Wisniewski stepped James Connolly, John Muldoon and Marmion to score under the posts and tag on the conversion. This is simply not the same Wisniewski who has travelled through five previous French clubs as a metronomic goal-kicker.

Soon after, the lively Poolman slipped and not only coughed up possession but was injured in the ensuing collision. It proved equally costly when Aplon stepped Henshaw off the ensuing scrum on half-way, and when Aki was done for not rolling away, Wisniewski landed the penalty, and then another one from a big scrum on half-time to make it 19-16 to Connacht at the break.

Half-tine barely constituted an interruption; Connacht running back Wisniewski’s kick-off from inside their own 22, Aki offloading under-arm to Connolly in a traffic jam of Grenoble players. When the Grenoble maul not so much marched as sprinted from their own 22 to half-way, McLeod threw out a loose pass which missed Wisniewski and Aki, charging up, snaffled. From the recycle, Fionn Carr (on for Poolman to add some more entertainment value) ran laterally and Healy, alive to the possibilities like a natural born full-back, sped onto the ball and skinned no less than the 17-times capped Springbok full-back Aplon to score untouched wide out. O’Leary tagged on a fine conversion for a 26-18 lead.

O’Leary tagged on a scrum penalty for a 29-16 lead but, needless to say this match and Grenoble were far from done yet. McLeod made the initial inroads with a break off a scrum from deep, and although Marmion and O’Brien held up Fabien Alexandre from another potent line-out maul, Denis Buckley was sinbinned.

Connacht had to put Aki into the back-row for the ensuing scrum, and Grenoble worked the ball to Dupont to steam through the ensuing midfield gap. Wisniewski converted to make it a six-point game. Not for the first time the ex-Ulster entre Chris Farrell, who had a big game, made the initial break for Aplon to carry hard into Connacht territory, Wisniewski and Dupont providing the link for Diaby to take the tackles of Quinn Roux and John Cooney and score by the corner flag. Wisniewski, incredibly, landed the touchline conversion to put Grenoble 30-29 in front.

From the restart however, Steven Setephano was penalised for holding on when Buckley poached brilliantly, and John Cooney kicked Connacht back in front. But when Dupont skated past Andrew Browne in the outside channels before Roux tackled him, Grenoble set up Wisniewski for a drop goal which, of course, he landed.

Connacht had one last defiant go. Carr made a stunning break but Dupont’s despairing tackle did enough to make him stumble, and although Grenoble lived offside for the next few phases, the officials turned a blind eye before Matthew Carley, who overall contributed handsomely to this wondrous contest, pinged Connacht for going off their feet.

The roar which greeted that decision underlined the home crowd’s delight and relief. Some match. They even applauded Connacht from the pitch. Fully deserved, but no consolation in that.

1 Philip Browne admits funding model for Irish rugby is not sustainable
2 BBC to show four live Premier League games as restart set for June 17th
3 Sideline Cut: Vignette shows why Bird is the true shark in The Last Dance
4 Coming fourth in the Olympics didn’t change this fearless quartet, time did
5 Dave Hannigan: Trump gets the clubs back out as death toll keeps rising
Real news has value SUBSCRIBE