Power and the glory goes to Blackrock 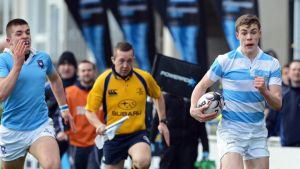 Blackrock centre Gary Ringrose makes his break to score a try in the first half at the RDS. Photograph: Eric Luke/The Irish Times

The passing of the mantle will have to wait. Blackrock College remain the dominate rugby school in Leinster.

The pre-match propaganda got as far as Ellis Park in Auckland where, by video link-up posted on youtube, the former All Black coach stated: “I know you got a proud history and are trying to add to that legacy. Go the Rock.”

Henry would have been purring at the manner in which Blackrock added to their 126 years of excellence on the rugby field as the aptly named Charlie Rock led them to a 67th title. In the process the holders, an outstanding St Michael’s side, littered with players so instrumental in last year’s success, were dethroned.

Those in 14,800 crowd and watching live on Setanta should be able to agree that this was a marvellous game, utterly gripping, until Rock’s right boot ended a four year drought with a flood of euphoria.

Rock is unique in modern time for a winning Blackrock captain in that he is a scrumhalf and not a member of the backrow fraternity.

The excellence of their flawless place-kicker Gary Ringrose, one miss in four matches, will live long in the memory but it’s their second try, with just five minutes remaining, that ultimately decided the result.

St Michael’s, led by the outstanding player on view, Ross Molony, were in control, leading 20-16 when Blackrock fullback Jack Power sprinted over in the left corner.

The initial break by Leinster under-19 number eight Sean Coughlan, employed as a Jonah Lomu-type left wing by Blackrock coach Peter Smyth, was dipped in cruel irony. Coughlan only gathered possession after the umpteenth garryowen by St Michael’s unflappable outhalf Ross Byrne was allowed bounce in the back field.

Coughlan took off, only hauled down outside Michael’s 22, but Nick Timoney (more from him next year) took up the charge, twice carrying to suck in enough defenders for Power to dive over out wide.

Ringrose’s third shot at goal, from the left touchline, sailed squarely between the uprights.

Blackrock had a three point lead, prompting their huge pack of forwards to rumble St Michael’s into the dirt.

However, for long tranches of the match the cup seemed destined to remain on Anglesea Road as this tactically astute St Michael’s outfit, coached by Andy Skehan, looked the superior group.

Ringrose drew first blood with a penalty after just two minutes but that merely sparked St Michael’s to life; Molony picking a sumptuous line to break through for a fine individual try that Byrne converted.

The final’s most amazing moment came on 13 minutes when a rampaging Murphy was double tackled by Timoney and Ringrose, the latter stripping him of possession and accelerating 80 metres for a try of beauty.

Of course, he banged over the conversion and when outhalf Peter Quirke clipped a drop goal moments later, Blackrock had a 16-7 lead from three forays into St Michael’s 22.

The champions also realised this, and refusing to panic, they went to their relentless rolling maul off Allen and Molony’s dominant lineout.

Penny seemed to have put them back on course with a try, having busted through Ringrose and Liam O’Dea, but Blackrock lock David O’Connor got his muscular body beneath the flanker.

Replays suggested the ball was grounded but without the option of a TMO, young referee Sean Gallagher cannot be heavy criticised. He reffed well in his first final.

16-14 to ‘Rock at the break, the heavens opened, prompting Byrne and Kelleher to launch bomb after bomb into Blackrock’s 22.

The reward was Byrne nailing two tricky penalties, as Blackrock defenders were living offside, putting them 20-16 ahead.

That seemed to be enough. Maybe history became a factor. Blackrock have never lost a cup match to St Michael’s.

Or maybe it’s as simple as the cameos of Ringrose, Coughlan, Timoney and then Power eventually told.