Roddy L’Estrange: Vinny’s day at races spirals out of control

It all started so well, with a pint of porter and a wallet full of crisp €50 notes 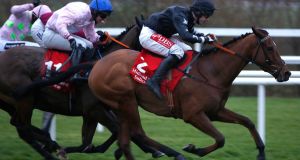 As the lads alighted Barney’s bone-shaker at the gates to Leopardstown on Monday, Vinny Fitzpatrick did his customary head count and identified a post-race pick-up point.

“We leave half an hour after the last race, at four bells. No stragglers now,” he cautioned.

The bus driver’s fussy concern for his pals on their irregular race outings from Foley’s earned him the nickname ‘Baden Powell’ behind his back.

“We’re like the Ten Little Indians from that Agatha Christie book,” grinned Vinny as he led the peloton towards reception, where 10 comps, courtesy of Winston’s For Winners, were waiting to be collected.

The day was foul, for both man and beast. While the pelting rain was bad, the gales were worse, as anything that wasn’t tethered down was in danger of being swept towards the N11.

“It’s on days like this, lads, where you benefit from ballast in your backside and little fat legs,” said a cheery Vinny.

As 10 pints of porter were pulled in the Champions Café Bar near the parade ring, Vinny called his troops to order.

“Lads, we’ve seven battles ahead of us, after which some of us will be in finer financial fettle than others.

“Yiz are all old enough to make up your own minds but you know my theory about big race days in Ireland over jumps, it’s all about ‘WPM Mullins’.

After a cry of “one for all, and all for one”, the lads shuffled off to place their bets for the opener.

Vinny did a double check on his stash for his battle with the bookies. He had €500 to hand, a huge sum for him but this was his biggest betting day of the year, outside of Cheltenham.

He knew in his heart Mullins couldn’t go through the card but the plan was to get a couple of winners on the board early on and then free-wheel to the Bumper where King Willie ruled.

Down by the rails, where the action was thick and plenty, Vinny muscled his way to the pitch held by Winston’s, and planted a nifty-fifty “to win on number three” at 5/1.

He didn’t know a lot about Bellow Mome, a French recruit for the Mullins yard but the Ruby Walsh-Willie combo couldn’t be ignored. Besides, a €250 return would set him up nicely for the day.

Ten minutes later, there was no triumphant return to the rails, as Bellow Mome never raised a bellow, and trailed in fourth.

It was an outcome which set off a chain of distressing results for Vinny.

But his mood started to darken when Tell Us More, backed in from 9/4 to 6/4 favourite, was a well-beaten third in the next.

With his placepot and jackpot plans in ruins, Vinny’s grey day went from bad to worse. His €50 on Blazer at 4/1 went up in smoke, as did his next ‘nifty’ on Arctic Fire at 5/4 in the long distance hurdle.

When Herminator (11/2) could only manage fifth in a handicap hurdle, Vinny was already €300 out of pocket – he’d rarely had a day as grim.

The big race of the day, the Lexus Chase, saw the Mullins hot pot, Don Poli, at odds-on in the ring. Putting on €60 to win €100 didn’t interest Vinny, not when his pockets were bleeding.

He went for the reverse forecast instead with Sir Des Champs, another Mullins runner, and watched in horror as Ruby’s ride got stuck in the mud.

There was one last chance dance, in the Bumper, where in-form Patrick Mullins was riding Some Neck for his dad.

Feeling desperate, Vinny begged the bookie at Winston’s to give him 2/1 – everyone else on the rails went 7/4 – and lumped his last €100 on the nose.

What followed was four-and-a-half minutes of hell as Some Neck, in front with two furlongs to go, was burgled by a ‘steamer’ in the betting, Gurteen, and lost by a length and a half. In less than four hours, Vinny, usually a careful punter, had blown half a grand.

“If Angie ever finds out, she’ll kill me,’’ he thought to himself as he hauled himself onto Barney’s Bus, and plonked heavily in the seat behind the driver, the last of the Ten Little Indians to board.

As Barney’s bus pulled away, Vinny thought of the wallet he’d opened earlier. It had been bulging with crisp €50 notes. And then there were none.