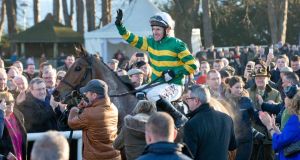 The lads knew when to leave Vinny Fitzpatrick “on his Tolberone”, as Fran put it. Apart from a couple of “Alright, Vinny?” there was no genuine effort to engage in conversation as Barney’s Bus loaded up with a rag-tag crew of Sunday race-goers.

Like the ghostly Garbo, Vinny preferred his own company these days, for which he had his reasons.

He shuffled blankly to the rear of the bone-shaker and plonked heavily on a window seat. There was an air of expectation on the jalopy, which Vinny didn’t share, as it wheezed away from Foley’s, for this was like no other day in the Irish jumps calendar. Not only were there four Grade One races at Leopardstown, each one providing useful Cheltenham pointers, but it was also the start of Tony McCoy’s grand farewell as the tough of the track.

As the lads compared McCoy’s strength with the other outstanding jockeys of the last 40 years, Francome, Scudamore, Dunwoody, Walsh and Geraghty, Vinny held his counsel. His eye was fixed on some far-off point. He half-listened and almost felt contempt at the shallowness of the lads’ existence.

There was a bigger picture at play here. Couldn’t they see it? The fools. Life, real life, wasn’t about bar-room argument or the momentary high of backing winners. It was about ethics; about doing the right thing. That’s what his folks had always told him and it was how he strove to lead his life. That’s how he wanted to be judged; as a good driver, father, grandfather and, above all, a good husband.

He had given his estrangement a lot of thought over that past few weeks and had come to the conclusion that for him to live, and to look the world square on, then a part of him had to die first.

And that would only happen when Rodger “The Dodger” Winston was out of his life, Angie’s life, everyone’s. From Vinny’s perspective, The Dodger had committed treason by shattering three of the Ten Commandments hammered into him in St Joseph’s 45 years ago – he hath stolen, coveted and committed adultery. And for that he would pay, thought Vinny. An eye for an eye, as the good book says.

For Vinny, this act was about doing the right thing. Morally, if not legally, he was adamant he held the high ground. With that, he felt inside his sleeve, where he’d secreted a switch-blade stiletto knife passed on to him by his Da for safe keeping many years ago. For the first time that day, a slight smile creased his flabby features. An old Irving Berlin number came to him, There may be trouble ahead . . .”

Leopardstown was jammers due to McCoy’s presence and Vinny was glad of the gathering for it was easier to hide in a pack. The herd were straining for a glimpse of McCoy in the famed green and gold silks of JP McManus. As he mingled with punters encircling the parade ring, Vinny’s gimlet eyes spied the sport’s big-wigs.

He clocked Ryanair chief Michael O’Leary, sunglasses atop his silvery mane, Rich Ricci, dapper in tweeds, and Barry Connell, a study of restraint. Studying the press corps, Vinny noticed after each race how slips of paper were thrust in their direction by representatives of the bookies giving their revised odds for Cheltenham. He saw Mike Dillon of Ladbrokes and felt a shiver because if Dillon was here, then his quarry, The Dodger, was likely to be too.

The first four races sped past in a blur. Then McCoy won the next race on a horse called Sort It Out, which prompted Vinny to mutter, “Don’t worry Angie love, I am about to”.

As the horses left the parade ring, Vinny felt a tug. It was Brennie who asked him to join him in the stands. Vinny replied: “Fire away, Brennie. I’ll watch it on the big screen.”

Ten minutes later, McCoy returned to a gladiator’s reception. The parade ring was full of rubber-neckers, including a burly busman from the Northside, who had snuck in at the far end of the ring. As McCoy punched the air, Vinny took a step back and cased the heaving joint.

Sure enough there was The Dodger, thrusting “Winston’s For Winners” slips to the hacks on which he’d scribbled a Cheltenham Gold Cup price for Carlingford Lough. Vinny checked the stiletto was in place and made his move.

Just then, the PA guy called for “Three Cheers for AP McCoy.” At the first hip-hip, Vinny was a length away from The Dodger; at the second hip-hip, he was half a length back; at the third, he was within a neck. And the neck was all he wanted. No one shouted the final “hooray” with greater gusto than Vinny as he thrust forward with purpose, the flash of blade glinting off a setting sun.

1 Six Nations: Ireland are contenders but England still the team to beat
2 Mike Catt hopes to have Irish backs purring in Six Nations
3 Owen Doyle: Creeping professionalism of schools rugby a threat to the game
4 The world spins but it’s soon back to Dublin and Kerry
5 Rowing: Ireland’s Olympics hopefuls shine at Indoor Championships
Real news has value SUBSCRIBE
Here is your handy guide to sport on television this week