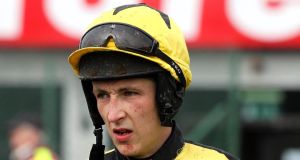 Jockey Eddie O’Connell: has already been banned for four years for his part in the Yachvili incident.

Yesterday Yachvili’s owner, Portrush, Co Antrim businessman Robert Martin, was disqualified for 10 years after being described as “the architect” of an incident in September of 2011, when Yachvili was pulled up by O’Connell in a steeplechase at Downpatrick after a substantial ‘lay’ bet with Betfair that the horse would not be placed in the race.

A total of £10,459 to win £2,910 was placed through the Betfair account of Staffordshire-based Lucy Stanton. Although the Turf Club yesterday said it was regrettable that the online firm didn’t contact them sooner about a bet considerably more substantial than was usual on Stanton’s account, Betfair did eventually pass on details which led to an extensive investigation, the findings of which were outlined yesterday. Phone records An examination of recorded phone conversations, transcripts and phone records contributed to the regulatory body deciding that Martin, Stanton and an English-based businessman, Brian Keown, were in breach of the rules of racing and had engaged in “corrupt or fraudulent practice in relation to racing in Ireland”.

As well as Martin’s 10-year disqualification, Keown has been ‘warned-off’ for eight years and Stanton has been banned for four years. The Turf Club has confirmed it will ask racing jurisdictions worldwide to reciprocate the bans which mean none of the three can go racing or own racehorses. O’Connell was banned from riding for four years on Monday and is contemplating an appeal. An appeal process is also open to Martin, Keown and Stanton.

Yesterday’s penalties are the most severe handed out by the Turf Club in modern times but are unlikely to bring an end to reverberations from what was otherwise a relatively mediocre Beginners Chase run on September 21st, 2011.

As well as a possible appeal by O’Connell, both the jockey and Yachvili’s trainer, James Lambe, are appealing to the Supreme Court a High Court decision in February which turned down their challenge to the Turf Club’s right to deal with the matter. Lambe was exonerated of all charges relating to the case earlier this year.

The only previous cases surrounding exchange betting that resulted in penalties came in 2011, when two Japanese employees of champion trainer Aidan O’Brien were fined €2,000, and 2010 when an employee of trainer Charles Byrnes was disqualified for four months. Lengthy report Yesterday’s lengthy report into the Yachvili case outlines how Martin and O’Connell spoke by phone a number of times on the day of the race. The Turf Club Referrals Committee decided that Martin communicated with Keown who, the Committee summed up, was responsible for imparting information, instructions and funds to Stanton.

A sum of £10,000 was deposited in Stanton’s account just after midday on the day of the race. Her only previous bet on Irish racing on that account was a lay bet of £45. The amount she wagered on Yachvili constituted over 90 per cent of lay bets placed and matched on Betfair on the horse in that race and over 76 per cent of their total market on Yachvili.

In recorded phone conversations on the day of the race, Stanton’s limitations in her understanding of betting substance and procedure became clear. At one stage she claimed she bet a disproportionally large sum on the horse because “she knew somebody who lived in Yachvili”.

The Turf Club Committee decided all three broke the rules of racing and as well as banning Martin for 10 years, they fined him €10,000.

“They were a bit slow off the mark initially but Betfair’s input into this was huge. They were able to supply us with all sorts of details including recordings of conversations,” the Turf Club chief executive Denis Egan said yesterday. “These are certainly the most severe penalties handed out by us in the last 20 years.”