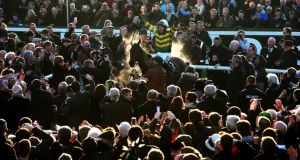 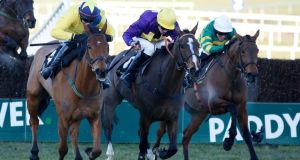 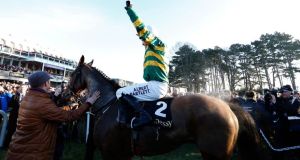 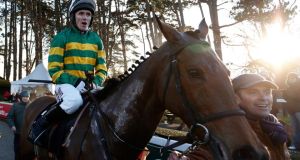 A little over 24 hours after Tony McCoy stunned the racing world in announcing he would retire at the end of the season, the irrepressible Ulsterman roared to a fairytale success in the Hennessy Gold Cup at Leopardstown.

McCoy had already ridden his first winner since his bombshell when Sort It Out scored at the Dublin track in the famous silks of his boss JP McManus, but that was to prove simply a taster for what was to come in the Irish equivalent of the Gold Cup. Again in the green and gold of McManus and this time for trainer John Kiely, McCoy produced 4-1 chance Carlingford Lough to perfection to get the better of a battle with Foxrock by three-quarters of a length.

“You can’t fight fate and it was obviously meant to be the way things happened,” McCoy said. “Fair play to John Kiely. Every day I’ve been on this horse he’s produced the goods.

“JP’s family are here and my family are here. It’s brilliant. It’s what’s meant to be. It’s amazing the people here at Leopardstown today. I have to be careful I don’t get too emotional, it’s not good for the image.”

Carlingford Lough was halved in price for the Betfred Gold Cup at Cheltenham next month, and McCoy said: “I might just get to steer him around on Gold Cup day at Cheltenham, which is probably the most important day of the whole jumping year and, on today’s performance, he’s got a live chance.

“He didn’t really perform great there last year, but he just didn’t get into a rhythm. He feels in great shape and look, it’s a very open Gold Cup and he’s definitely going to go there with a chance, hopefully.”

Reflecting on his decision to retire, McCoy, who was afforded a hero’s welcome on his return to the winner’s enclosure, said: “At the beginning of the season, after Jezki won at Punchestown, I was at home with JP and his son John and I mentioned that there was a possibility this could be my last year because I’ve been lucky enough to win 19 jockeys’ championships and if I could win 20, it would be a great number.

“I wanted to start the season and give it everything I had and I was lucky I rode my fastest 50th winner, my fastest 100th winner, my fastest 150th winner and I genuinely believed I was going to ride 300 winners, I had no doubt it was going to happen. Then I got injured at Worcester one day — I dislocated my collarbone, I punctured my lung and I broke a couple of ribs — and the crazy thing about it was I went back racing three days later thinking I could get through it.

“Then I got another fall not long afterwards and managed to break the collarbone that I dislocated. For those three weeks I probably struggled a lot mentally because I had thought that something I wasn’t able to achieve for 20 years was going to happen and then it was taken away and that was probably the only thing in racing, in terms of achievement, that really broke my heart.

“So then it was just about trying to get the most out of it as I could. My wife Chanelle had no idea what was happening and I asked my agent Dave Roberts, who has been looking after me for 20 years, to come down on Monday night. I had the conversation with him — Chanelle had no idea, the only other person in the world that had any idea, I think, was JP and I told Dave in front of Chanelle and they were both a bit gobsmacked.

“I said I was thinking about retiring at the end of the season and I was wondering what way to go about it, whether I just leave it until after Aintree and then I was very aware that people might speculate because hopefully it was going to be my 20th year — I wanted it to come out on my terms.

“I wanted it to be me that said ‘this is the time’ and I decided that I was lucky to be close enough to ride my 200th winner and I hoped that if I rode my 200th winner, then that would be the time. It was a good achievement, it was on a high and it was going to be on my terms. Then I hoped that I could enjoy my last few months riding, which I’m going to do.”

McCoy said he intends to get Cheltenham and Aintree behind him and decide then whether to go out on a winner or ride until the last day of the season at Sandown on April 25th.