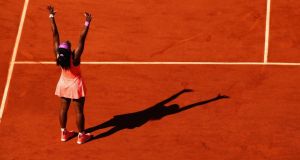 The American, who skipped practice on Friday because of a bout of flu, opened up a 6-3 4-1 lead but suddenly slumped as the 13th-seeded Safarova stormed back into contention, even moving 2-0 up in the decider.

But Williams regained her composure and won the last six games to win the clay court major for the third time after her 2002 and 2013 titles.

She is now third on the list of all-time major champions behind Australian Margaret Court (24) and German Steffi Graff (22).

“It was complicated, Lucie played very well, she’s a superb opponent, she was very aggressive,” Williams said courtside in French.

“I got a bit nervous but it’s alright, it’s a dream for me. To win it (the 20th Grand Slam) here is special for me because I don’t always play very well here.”

On a sun-kissed court Philippe Chatrier, it looked as though the spectators would be heading home in good time as Williams took an early stranglehold on the match.

The American sought to keep the rallies short and prevent Safarova from getting into her groove from the baseline.

The plan initially worked to perfection.

A sizzling forehand gave her the first break and she then held to bag the opening set when Safarova returned a kicking serve into the net.

In the 17 times Williams had won the opening set of a Grand Slam final, she had gone on to win the title.

It all seemed too much for Safarova, who dropped serve in the first game of the second set when Williams hit a backhand winner, while another backhand winner in the fifth game secured a second break for the American.

But then everything began to go wrong for Williams.

She served two double faults in succession as Safarova got a break back before two clumsy backhands and another double fault helped the Czech break again to level for 4-4.

It still seemed as though Williams would close it out in straight sets when she broke for 6-5, but a splendid backhand winner down the line from Safarova sent the set into a tiebreak.

The Serena meltdown continued as Safarova won it 7-2.

A backhand wide earned the Czech a break in the first game, only for Williams to break back for 2-2.

While the American was struggling to keep her frustrations in check and was given a warning for swearing, she eased home comfortably.

“It’s been a great two weeks here for me,” Safarova said.

“Serena you were amazing, you are a great player and a great fighter.”