Attention focussed on debut performance of US Army Ranger 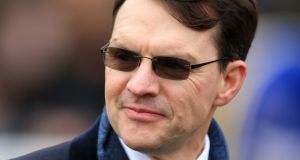 A trio of rides for Aidan O’Brien includes Dick Whittington in the featured Group 3 Big Bad Bob Gladness Stakes but whether or not Moore gets the opportunity to team up with his Breeders Cup heroine Found in the Coral Alleged Stakes may depend on the weather outlook. Ground conditions are already testing at the Curragh with almost an inch of rain forecast through the weekend. O’Brien has indicated he will make a late call on Found’s participation .

Ultimately it could be Moore’s other Ballydoyle mount, the unraced US Army Ranger, who is the focus of most attention in the concluding 10-furlong maiden.

Moore rode 11 winners in Ireland in 2015 but Joseph O’Brien’s retirement could result in more visits by the 32-year-old Englishman.

The days of the Gladness Stakes being a significant Guineas trial look to be in the past with nine older horses lining up in the historic event, including the 2014 winner Sruthan who bounced back to form with a vengeance by landing the Lincolnshire here a fortnight ago. Paul Deegan’s star has been hiked 11 lbs in the ratings for that defeat of his stable companion Aussie Valentine and he appears one of the few in the race who will relish very testing ground.

Colm O’Donoghue is on Cougar Mountain but his link-up with Jessica Harrington sees the Cork jockey riding the Alleged hopeful, Bocca Baciata, among four runners sent to HQ by the Moone-based trainer.

Bocca Baciata likes give in the ground, although perhaps not as much as she’s likely to get for the first start of her four-year-old career. Nevertheless she should be a major player in this listed event, even if Found lines up too.

Callender was running on well in the closing stages of the first two-year-old contest of the season a fortnight ago and with normal improvement for that experience looks an obvious candidate for the opener.

In other news, amateur jockey Barry Browne has lodged an appeal to the Turf Club’s Referrals Committee against his seven-day suspension for misuse of the whip at Fairyhouse on Easter Monday. Browne was banned after riding On The Shannon to success in a novice handicap chase.