Champion jockey will be on board Childrens List, Sure Reef and newcomer Brontide 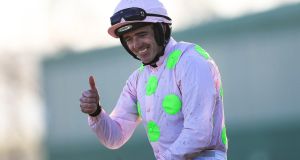 The champion jockey rode 11 winners from 20 rides over the four days at Leopardstown and will be on board Childrens List and Sure Reef for Willie Mullins on Saturday.

It is Walsh’s other ride which is likely to catch some attention though when he teams up with Conor O’Dwyer for the jumping newcomer Brontide in a three-year-old hurdle.

The ex-Jim Bolger horse was progressive on the flat although both he and the aptly named A Year To Remember do have to concede experience to Dakota Moirette.

Sure Reef returns to action after almost three years out in a conditions hurdle which sees Monksland with an obvious chance although the giant Tycoon Prince is another in the reckoning.

Childrens List has a job on his hands in a competitive-looking Beginners Chase which looks a good opportunity for Joseph O’Brien’s Edwulf.

This one was still in contention until unseating Mark Walsh at the last in Navan when up against the subsequent Grade One winner Our Duke. The step up to three miles plus should only be in Edwulf’s favour.

O’Brien teams up with Michael O’Leary for the well bred bumper newcomer Dawn In The Park.

Duke Cass brings a 6lb penalty from winning at Limerick on Tuesday into the 2½-mile handicap hurdle but can still exploit a light weight on these testing conditions, especially with Donagh Meyler taking 3lbs off his back.

Shane Lowry makes strong start with opening 69 at Muirfield Village 21:29
Richarlison’s touch of class rescues point for lacklustre Everton 21:11
Tottenham lucky not to leave Bournemouth empty-handed after another poor show 20:53
Dara O’Shea proves his worth with second goal for West Brom 20:30
F1 warns Leclerc over breaking Covid-19 protocols 20:24
Here is your handy guide to sport on television this week