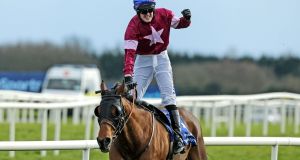 Rogue Angel is unlikely to line up in the Grand National at Aintree on Saturday week following his emotional triumph in the Irish equivalent on Easter Monday.

The Gigginstown House Stud-owned eight-year-old benefited from a brilliant front-running ride from conditional jockey Ger Fox to claim victory in the Fairyhouse feature, reducing trainer Mouse Morris to tears as he paid tribute to his late son, Christopher, who tragically died last summer from suspected carbon monoxide poisoning while travelling in South America.

Rogue Angel is reported to have taken his exertions in his stride, but with him sitting 70th in the Grand National list and therefore unlikely to make the cut anyway, Morris is considering alternatives, with the following week’s Scottish Grand National at Ayr a possible target.

“There’s not a bother on him this morning, you wouldn’t think he’d had a race,” said the Fethard-based trainer.

“We got on the right side of the line for once and it was a brilliant day.

“He jumped super. He got a very positive and courageous ride, but it was the right thing to do and it paid off.

“We’ll probably look at the Scottish National or Punchestown, but I’ll speak to the lads (Michael and Eddie O’Leary) and see what they want to do.”

Although Rogue Angel is set to stay at home, Morris still hopes to be doubly represented in the Aintree spectacular.

First Lieutenant, 16th in last year’s renewal under Nina Carberry, is being readied for another appearance, with Gigginstown’s retained rider Bryan Cooper set to be on board.

Stable companion Rule The World is also an intended starter and with Carberry free to ride after having the dates of a suspension moved, Morris will consider giving her the mount if the Gigginstown team agree.

He said: “Rule The World and First Lieutenant will run, as long as we can keep them sound.

“I don’t know who will ride the other horse yet, I’ll need to speak to Michael and Eddie, but she (Carberry) would be on the list.”