Champion trainer has nine starters on first day card worth over €500,000 with Cheltenham heroes Don Poli and Douvan odds-on to secure more Grade One success 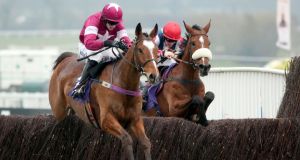 Don Poli ridden by Bryan Cooper on the way to victory in the RSA Chase at the 2015 Cheltenham Festival, Prestbury Park, Cheltenham. Don Poli and Douvan are near un-backable odds-on shots to secure more Grade One success at Punchestown. Photograph: Inpho

Punchestown’s Festival throws an impressive statistical blizzard at race fans in terms of a €2.5 million prize-fund with a dozen Grade One’s spread among 38 races over five days, but for many among an anticipated 110,000 attendance this week the only relevant statistic will be what Willie Mullins runs.

The all-conquering champion trainer smashed Cheltenham records last month but it is his home festival at which Mullins is truly peerless and 2015 could see him redraw the Punchestown boundaries again.

Considering he has been top trainer here for the last nine years, during which time he has saddled 79 winners, including 13 in 2013 and a dozen each in 2009 and 2010, that requires a substantial amount of drawing. But never before has a trainer brought the strength in depth to Punchestown that Mullins does this year.

Mullins has nine starters on an opening day card worth well over €500,000, including three in the big two-mile chase, but it is Don Poli especially who will be the centre of attention in the €95,000 Growise Champion Novice Chase.

Already disputing Gold Cup favouritism with Vautour for 2016, Don Poli’s credentials to finally secure his trainer an elusive blue-riband title next season are faultless so far, to an extent even a proven Grade One winner like his stable companion Valseur Lido is firmly in the wings in terms of this race. What he will provide, with Apache Stronghold, is an intriguing form tie-up with Vautour although it seems bare form credentials can’t measure what potential Don Poli possesses.

Mullins affectionately refers to the Gigginstown star as a “big galoot” and said: “He’s only copping on now he has to race and actually pass the other horses . . . his performance in Cheltenham was something else. Bryan (Cooper) is getting more confidence in him and knows when he gets daylight the turbo kicks in.”

There will be plenty of daylight with just a five-runner field and possibly the only bigger surprise to a Don Poli defeat will be if Douvan gets turned over in the Herald Champion Novice Hurdle.

The Rich Ricci-owned star got Mullins’s Cheltenham off to a perfect start in the Supreme last month, a display which in bare form terms gives him seven lengths in hand of Sizing John. Already Douvan is as low as 6-1 second-favourite for next year’s Champion Hurdle behind another Ricci-owned star in Faugheen.

St Stephens Green is the Mullins hope in the Goffs Bumper. It’s a decade since a cross-channel-trained winner of this race but three raiders line up and the Wincanton winner Bon Enfant could relish the ground conditions.

1 Gordon D’Arcy: If Farrell can tap into our self-worth, we’re all on a winner
2 Winds of change as Ireland name a refreshed team, picked on form
3 Who is Caelan Doris? Meet Ireland’s newest rugby star
4 Nike Vaporflys won’t be banned but regulations will tighten
5 Big paycheques lure the world’s best to Saudi Arabia
Real news has value SUBSCRIBE