Powerful Irish contingent to contest renewal but Ebanoran has edge 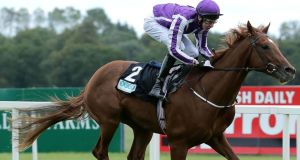 Australia ridden by Joseph O’Brien is likely to start favourite for the Derby. Photograph: Inpho

If the Epsom Derby could be decided on reputation then Australia would virtually be past the most famous finishing post in racing already and Aidan O’Brien would have secured a historic hat-trick in the world’s most coveted classic: but it requires only a short hike back through the Derby’s 234-year history for a stark reminder that it’s never so simple.

Since last September O’Brien has been describing Australia as the best horse he’s ever had through his hands, a notable comparison that involves four previous Derby winners.

One of that quartet was Galileo who since winning in 2001 has become the most valuable stallion in the world with a progeny-list topped by no less than Frankel. In 2004 Ouija Board won the Oaks over these unique contours. The product of their mating, Australia, couldn’t have a better Epsom pedigree. Today’s hot-favourite also comes here on the back of a third in the 2,000 Guineas that is the clear pick of the form boasted by all 16 of today’s runners.

If Australia lives up to all those elements, especially the reputational one, he could win easily and thus allow O’Brien become the first trainer ever to win the Derby three years running. Even the prospect of today’s forecast rain turning the Epsom ground softer than ideal won’t dissuade those who believe Australia to be the undisputed number one, not only among the champion trainer’s team of four runners, but everything else too.

However it is only 30 years since El Gran Senor travelled from Ballydoyle to Epsom in possession of a reputation as potentially the best Vincent O’Brien ever trained, boasting an unbeaten record that included a vintage 2,000 Guineas victory, started odds-on, and wound up being beaten by Secreto who happened to be trained just a mile away by O’Brien’s son David.

The two other Irish trained hopes today come from further away on the Curragh and while Fascinating Rock will attempt to put his trainer Dermot Weld on racing’s ultimate roll-of-honour, the fact Ebanoran is being given a shot at the race at all is a pointer towards his credentials as possibly the double-figure betting value.

John Oxx has run three horses in the Derby. Sinndar won, as did Sea The Stars, and Alamshar, Oxx still feels, should have won but had to settle for third. As strike-rates go, one of the few to compare is the Aga Khan’s: the owner’s dozen runners have yielded four winners.

With the focus resolutely on Australia, Ebanoran slips into Epsom comparatively under the radar but he’s lining up, and with a typically understated confidence from connections that he can make his presence felt.

Ebanoran was first past the post in last month’s Derrinstown Trial at Leopardstown, doing no favours to either Fascinating Rock or Geoffrey Chaucer and not surprisingly was demoted by the stewards. However Oxx, not a man to indulge in wishful thinking, is prepared to forgive him that waywardness, pointing out he shied away from a photographer on the finish-line.

There will be a hundred thousand photographers, amateur and professional, zeroing in today but that experience could prove crucial and Oxx said yesterday: “He’s improved enormously from race to race to date, taking a big stride forward each time. But he has to do it again to be in the money.”

In financial terms victory for Australia today could make him invaluable. But all the talking will cease at 4pm today. The Derby’s reputation as the foundation of the thoroughbred breed rests on testing the reputations of those racing over the most famous mile and a half in sport.

Maybe Australia can live up to his reputation and put up a landmark Derby performance. But the betting value could be Ebanoran.