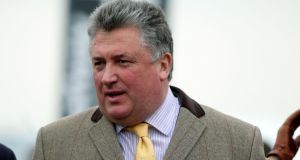 Flat racing’s classics are firmly centre-stage this week but Hurricane Fly’s hold on the Irish racing public’s imagination guarantees focus will briefly switch to Paris this Sunday for the legendary star’s attempt on the French Champion Hurdle.

The world-record Grade One holder is set to head Willie Mullins’s attempt at a fifth victory in the €370,000 Grande Course de Haies d’Auteuil in what will be The Fly’s first start in France in almost seven years.

The three mile and one and a half furlong trip will be the longest Hurricane Fly has tackled in his career to date but only his old rival Jezki got the better of him in his first start at three miles at Punchestown a month ago.

Mullins won back to back renewals of the French Champion Hurdle with Nobody Told Me and Rule Supreme in 2003-04 and has the option of also running his dual-scorer Thousand Stars (2011-12) in the jumping feature.

Ireland’s champion trainer has three other entries – Val De Ferbet, On His Own and Blood Cotil – for a contest which could also see David Pipe represented by the Prix la Barka winner Ballnagour and Un Temps Pour Tout while Paul Nicholls is targeting the race with Zarkandar.

Mullins landed France’s version of the Triumph Hurdle, the Prix Alain Du Breil, with Diakali in 2013 and has two of the 13 entries currently left in Sunday’s €270,000 renewal, Petite Parisienne and Buiseness Sivola.

Mullins has a couple of runners at Listowel’s Bank Holiday Monday card and the ex-John Gosden trained Thomas Hobson looks an interesting recruit to jumping in the opener.

Another ex-Gosden runner, Nichols Canyon, was a four-time Grade One hurdles winner last season and Thomas Hobson wasn’t rated that far behind him on the flat.

The Group Three Racing Post Lacken Stakes highlights a Naas Bank Holiday fixture which also has three Listed contests and it can provide James Doyle with another lucrative trip to Ireland.

Godolphin’s jockey won last week’s Tattersalls Gold Cup on Al Kazeem and can land the Lacken for his employers on board Toscanini while Birchwood can cement Godolphin’s new link with Richard Fahey in the Rochestown Stakes.

The colt who kicked off Ryan Moore’s Newbury five-timer a fortnight ago was recently bought by Sheikh Mohammed and the cross-channel raider is highly rated by his Yorkshire based trainer.

Any ease in the going caused by forecast rain could help Taisce Naisunta’s chance in the Listed fillies contest.