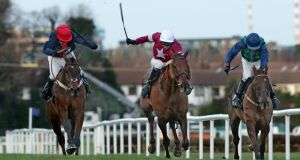 First Lieutenant (centre) finishes second, beaten a length and a half, to Bobs Worth (left) in the Lexus Chase and could renew rivalry in the Gold Cup on Friday week.

It is 40 years since Mouse Morris first tasted Cheltenham success but the trainer who has rarely if ever made a wrong festival move admits he is in a quandary about what race to aim his star performer First Lieutenant at next week.

The Gigginstown Stud horse is a prime 5/1 fancy for the Ryanair Chase which is sponsored by his owner, Michael O’Leary, and a race in which he finished runner-up to Cue Card last year. However, First Lieutenant is also as low as 12/1 in ante-post betting for the Gold Cup.

Gigginstown also have Last Instalment entered for the Gold Cup but any suggestion that eventual running plans could be swayed by what happens this week in terms of what the British Horseracing Authority’s may decide to do in relation to allowing Philip Fenton’s Cheltenham entries run at the festival was ruled out by the trainer yesterday.

“The ground will be the big thing,” Morris insisted. “He’s second favourite for the Ryanair but he’s also in the Gold Cup and I’m a bit betwixt and between at the moment. We’ll have to see which race he will go for. I would imagine it will be a late decision.”

First Lieutenant famously beat Rock On Ruby in the 2011 Neptune Novices’ Hurdle at the festival and in the last two years has finished runner up twice, both in last year’s Ryanair and to Bobs Worth in the 2012 RSA.

It is an impressive overall Cheltenham record, and part of Morris’s long association with Cheltenham which began as a jockey when he won the 1974 National Hunt Chase on Mr Midland.

Gigginstown will again provide the bulk of Morris’s 2014 challenge as Rule The World is on course for a clash with Big Buck’s and Annie Power in the Ladbrokes World Hurdle and Rogue Angel is due to line up in the four-mile amateur contest.

“Rathlin is in the Ryanair and he would run there if First Lieutenant goes to the Gold Cup,” the trainer said. “Baily Green goes for the Queen Mother Champion Chase.”

The Queen Mother is a race Morris has won both as a jockey on board Skymas and as a trainer with Buck House.

One rival Rule The World won’t have to worry about is Noel Meade’s Monksland who has been taken out of the race by the Co Meath trainer. The horse hasn’t run since winning at Leopardstown in Christmas of 2012. “He’s good, but he’s just not going to Cheltenham. We’ve got a bit of a problem here with a few dirty noses and temperatures and whatever so he’s not going to go,” Meade said yesterday.

“Liverpool is a possibility and there’s Fairyhouse and Punchestown hopefully. Any of the other places are possibilities. We’ll have to see how we get on.”

Another Lieutenant in Gigginstown’s Cheltenham arsenal is the Dessie Hughes-trained Lieutenant Colonel who is on course to run in the Neptune next week.

Runner-up to Vautour earlier in the season, the gelding was second to another Willie Mullins novice, Wicklow Brave, over two miles on his last start at Punchestown but will now step up in trip.

“I was pleased with his run at Punchestown. I think the winner is a very good horse and form looks strong with the third (Real Steel) coming out and winning at Naas,” Hughes said.

“Two miles looked too sharp for him so we hope there will be improvement going up in trip. The ground isn’t a concern. He goes on any ground.”