Cheltenham festival winner one of four Mullins runners in €100,000 feature 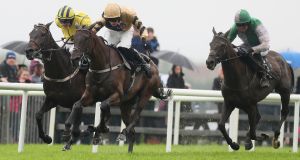 Having been out of action for over 16 months prior to Monday, Limini makes a quick Galway turnaround on Friday evening.

The Cheltenham festival-winning mare is one of four Willie Mullins runners in the featured €100,000 Guinness Handicap and could become a bandwagon bet for the festival crowd.

She travelled through Monday’s big amateur prize like a class act only to be swallowed up in the final stages by her stable companion Uradel.

Despite that Mullins immediately pointed towards Listed and Group races on the flat as a likely route for Limini in future.

Given such expectations the prospect of her lining up off the same 89 mark in a mile and a half handicap will be relished by many.

Kevin Manning takes the ride on the Rich Ricci-owned mare – just as he did on Riven Light at Listowel last year – and, despite a 14-strong field for what is normally an ultra-competitive heat, Limini might be capable of operating at another level.

On The Go Again just failed to get promoted from second-reserve into the Galway Hurdle but can gain compensation in the concluding race.

The week’s weather has been punishing on ground conditions and the Galway card has been reshuffled to put the flat action first.

That won’t be any problem to On The Go Again who is versatile in terms of going as well as code.

A Lartigue winner at Listowel last year, since his last start over flights On The Go Again has since won an Irish Lincolnshire and a Listed race on the flat.

He returned from a lengthy break on the flat at Down Royal last Friday and although a 134 jumps rating wasn’t quite enough to get him into Thursday’s big race it looks to leave On The Go Again in a good position here.

Dermot Weld’s Sea The Stars filly Lure Of The Sea did well on her debut on firm ground but these will be very different conditions. Lure Of The Sea is hardly bred to relish them so Shes Gold, a daughter of Jeremy, might improve enough from a promising Killarney debut to contend.

Aidan O’Brien runs James Cook in Galway’s feature and maintains his presence at Goodwood on Friday with three starters headed by Sioux Nation in the Group Two King George Stakes.

Last season’s Phoenix Stakes winner has failed to hit the mark in two Group Ones although he stepped up from a lacklustre Royal Ascot effort when fifth to his stable companion US Navy Flag in the July Cup.

He gets a valuable 6lbs from the likely favourite Battaash but that might not be enough against Sheikh Hamdan’s speedball. Battaash proved in this last year how a lightning fast five furlongs is perfect for him.

Threeandfourpence lines up in an earlier Group Three while Most Gifted takes her chance in the Oak Tree Stakes.