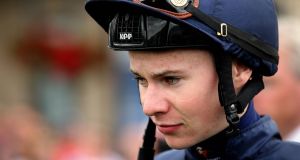 Jockey Joseph O’Brien was aboard Air Force Blue for two of his four wins in 2016. Photograph: Ryan Byrne/Inpho.

Joseph O’Brien is predicting big things from Air Force Blue in 2016. A winner of four of his five starts at two for Aidan O’Brien, with O’ Brien jnr in the saddle for two of them, his only defeat came behind Buratino in the Coventry Stakes at Royal Ascot. He later went on to turn that form around in the Phoenix Stakes and concluded a great first season with a comfortable win in the Dewhurst at Newmarket.

“Air Force Blue is an exceptional horse; he has a lot of speed and class,” said O’ Brien. “He never looked like he was going to be a two-year-old as he’s such a big horse, but he just got better and better all year.

“He always worked well and really improved when he got to the track, every time.

Unusually the winter Derby favourite does not hail from Ballydoyle but there could be some nice types lurking.

“With regards to the Derby, we’ve a number of nice Galileos that all ran very well in big races,” said O’ Brien. “We’ve Johannes Vermeer who won the Group One in the France [Criterium International] and we’ve a horse out of Remember When, Beacon Rock, who ran very well a couple of times.

“We also have a couple of nice Galileos that haven’t run and we’ve a nice horse that was just beat in a maiden at Leopardstown towards the end of the season. So we have some nice horses that may be a little bit under the radar hopefully.

“Galileo is probably the best sire ever and you could never have enough of them. Air Force Blue is the main one for the mile, mile-and- a-quarter campaign but we have others who might be under the radar.”