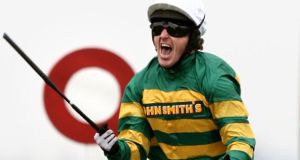 Tributes have been flooding in for jockey Tony McCoy ahead of his final race including from former mentor Jim Bolger. Photo: David Davies/PA

Jim Bolger, the man credited with instilling the winning mentality into Tony McCoy as a teenager, insists the retiring champion always had the desire to reach the top.

Bolger, who has been the mentor for many top jockeys early in their career, has a reputation as a hard taskmaster.

Yet the County Carlow handler says he only had one cross word with McCoy.

Having broken his leg early on in his career, Bolger felt the jockey would be better suited by staying in Ireland for another season, instead of moving to Britain, where he would join Toby Balding.

That aside, both men have the utmost respect for each other, with McCoy often crediting Bolger for his ultimate professionalism.

“He was a little gentleman at that stage, and it remained that way for the three and a half years he was with me,” said Bolger.

“But all’s well that ends well, he went jumping fences and everything turned out good for him.

“He always had the will to win, and as soon as he got the opportunities he made it quite clear he was up for the job.

“I would have done very little with him in the line of tutoring, he was well able to ride when he came.

“It was just a question then of him getting the experience that was needed on the track.

“He had a very effective way of doing things and whoever has the same will to win, and if he succeeds in copying what Anthony did, he will be champion jockey as well.”

Former champion jockey John Francome says he would not be surprised if the lure of the racecourse proves too much for McCoy as he tries to pick up normal life following his stellar career.

With him set to bow out after 20 years as champion at Sandown on Saturday, Francome believes he will have a massive hole to fill, leaving open the door for a return to the saddle.

Francome moved into the media and is currently president of the Injured Jockeys’ Fund but with McCoy being so committed for every day of his career, he expects McCoy may find the more sedate pace of everyday life hard to adjust to.

“More than the amount of winners he’s had, it’s the fact that I’ve never watched him ride and thought he’s starting to lose his nerve or seen somebody more committed,” Francome told Racing UK.

“When I was riding we only raced 10 months of the year and infrequently during the summer. I’d love to know how many days holiday he’s had in 20 years but it won’t be many.

“To have that will power, drive and determination. More than his riding it’s his mindset that has captured me over the years and it won’t be the same on a morning and picking up a paper, not seeing his name anywhere.

“I can’t believe for a moment he won’t find it really difficult to adjust having been so committed to something for so long, it won’t surprise me if he comes back.”

Francome admits retirement did not leave a yawning space in his life, but he also points to McCoy’s incredible drive as a reason why he may find it tough to readjust to life outside the weighing room.

He said: “I never wanted to be a jockey so it never bothered me packing up but when that has been his whole life, all the figures are astonishing but even more so because I’ve never looked at him and thought he was a completely natural rider.

“He has done what he has done by being completely and utterly determined. I think he’ll admit not all horses run their best for him.

“By and large he likes to make their mind up for them and that is what has set him apart from other jockeys.

“I think whatever you’d have put him at, he’d have been successful at as that is just the way it is — he has an amazing will to win.

“I think he’s been a very good example to lots of lads and he’s come out of his shell much more in the last six years.”

Andrew Thornton shared the weighing room with McCoy throughout his 20 years as champion and believes his records will never be broken.

Thornton, a Gold Cup winner himself, has seen McCoy evolve from a winner-hungry conditional into a legendary figure.

He believes there are certain facets of the man which mark him apart, including the in-depth feedback he is able to give to connections of horses after a race.

“For a man riding so well it must feel very strange,” said Thornton.

“He has made the decision and probably still doesn’t know if it is the right one, but time waits for no man.

“He always seemed to have so much time when riding, he is very aware of what everyone else is doing.

“In a race, if you need a bit of daylight you never hear him moaning or shouting like some of the others or feeling hard done by.

“There is no better man to give feedback than AP. The feedback he gives is so in depth.

“When I have been in a car travelling back with him he will analyse a race and pull it apart on what he could have done better.

“He has made so many contacts, he has not just to keep the likes of the Jonjo O’Neill happy but the little trainers, too.

“They looked after him when he was younger and he looks after them now.”

Thornton has also witnessed McCoy change not just as a jockey, but as a person.

“He has changed so much from somebody who was quiet in the early days when he first came over and he was a nightmare with the media,” said the rider.

“I remember having a conversation with him a few years back telling him that you will realise they are to your benefit and to embrace it, which I think he has done.

“I would even say that he enjoys it now. It has been a big change.

“No one will ride for any longer than he has and it is the fact that he has dominated at such a high degree, not for 10 years but for 20 years.

“He constantly rides more than or around 100 winners than the runner-up in the championship.

“The one ride that will stick in my mind is Wichita Lineman at Cheltenham in 2009.

“That horse should have never have won, but six out AP still thought he might have a chance.

“When they say that records will get broken I don’t think his will.”