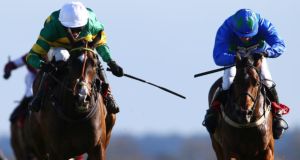 Jockey Mark Walsh onboard Jezki battles it out with Ruby Walsh and Hurricane Fly in the The Ladbrokes World Series Hurdle at Punchestown. Photo: Cathal Noonan/Inpho 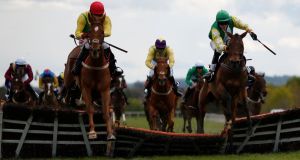 Jezki got the better of old rival Hurricane Fly to clinch the Ladbrokes World Series Hurdle at Punchestown.

The Fly had got the better of his opponent on each of their four previous meetings this year, but this represented a different test for both horses as the pair encountered three miles for the first time.

Jessica Harrington’s Jezki (5-2), winner at the intermediate distance of two and a half miles in the Aintree Hurdle last time out, travelled noticeably well in the hands of Mark Walsh, while Ruby Walsh never appeared totally content aboard Hurricane Fly, who made one or two uncharacteristic jumping errors.

Class rose to the top before the home turn, however, with the big two quickly leaving their rivals trailing and it was set up for a grandstand finish.

Jezki had more in the tank, though, and try as he might, the Willie Mullins-trained Hurricane Fly was unable to bridge the gap, going down by a length and three-quarters in his quest to win a 23rd Grade One prize.

The winning rider said: “He travelled too well if I’m honest. He settled fine early but something lit him up. He’s some horse to win despite that. His class got him through.”

Winning owner JP McManus said: “It’s nice to beat the Hurricane, but he’s such a marvellous horse. When you think of all the Grade Ones he’s won, he’s been the best hurdler for a long time. It’s nice to beat him today over three miles.

“The fact that he won today, at least we know he gets three miles. We thought he would. I didn’t think stamina would be a problem, I thought Hurricane Fly would be his problem!

“Faugheen beat us quite convincingly at Cheltenham, so we took the easier option.

“I think the win at Aintree just gave this horse a lift and in fairness to Jessica, she had him in wonderful condition. He looked a picture.”

Harrington said: “That was brilliant. I was hoping he’d get home as he was pretty free and tanking with Mark. He jumped brilliantly and lasted home. Three miles seems no problem.

“He’s an amazing horse for me to have. He’s basically very straightforward. He does like the spring with a bit of nice ground and the sun on his back. He’s a better horse now than in the winter.

“Mark gave him an absolutely terrific ride and I’m really pleased for him. Punchestown is the local racecourse and I love having winners here.”

Un De Sceaux predictably proved too good for his opponents in the Ryanair Novice Chase.

Three from three over fences since falling on his chasing debut, the Arkle Trophy winner was a 1-10 favourite for his latest Grade One assignment and his task was made even easier when second favourite Smashing bolted on the way to the start and was withdrawn.

The Willie Mullins-trained seven-year-old soon adopted his customary front-running role in the hands of Ruby Walsh and gradually wound up the gallop.

Turning for home he was still hard on the bridle and although Micky Hammond’s British raider Just Cameron ran a magnificent race to fill the runner-up spot, the market leader was always doing enough to make it 13 starts unbeaten when he has completed.

Walsh said: “The ground has dried all day and it was on the quick side for him, I just want him to be okay in the morning.

“He was deliberate at the first and high at the second. They’ve put plenty of water on but it’s a glorious day and has been drying all the time.”

Uncle Junior (6-1) saw off Quantitativeeasing in a barnstorming finish to the La Touche Cup.

Quantitativeeasing was the 13-8 favourite to gain compensation for his luckless run at the Cheltenham Festival where he was carried out in the Glenfarclas Handicap Chase when primed to deliver his challenge.

The market leader moved sweetly throughout under Nina Carberry around the banks circuit, but Patrick Mullins appeared equally confident aboard the 14-year-old Uncle Junior, who finished third at Cheltenham, and the two swept clear to fight it out from the home turn.

There was little to choose between the pair jumping the final fence, after which Quantitativeeasing went a length up, but the teenage Uncle Junior roared back bravely to win a thriller by a neck with Keep On Track third.

Winning trainer Willie Mullins said: “He’s some hero in our yard. At 14 to run a race like that is fantastic.

“He always makes one bad mistake and hadn’t throughout so I said coming to the last ‘here it comes’, but he only lost half a length.

“He appreciates the drier ground and the sun on his back. Normally he drops out and it takes three and a half miles for him to warm up, but today after half a mile I was hopeful he’d run a big race.”

A winner at Navan at the end of March and Fairyhouse little over a week ago, the Liam Cusack-trained Bog War was a prohibitively priced 5-2 market leader to complete a hat-trick in this fiercely competitive 25-runner contest over the minimum distance.

Mullins settled the five-year-old in midfield for much of the two-mile journey before allowing him to close down the leaders before the home turn.

Bog War tracked 20-1 chance A Sizing Network into the final flight and looked to have blown his chance after a mistake, but he got rolling again on the run-in and passed the post a head to the good.

Seeyouallincoppers and Equity Swap filled out the places in third and fourth respectively.

The JP McManus-owned 10-year-old was a 10-1 chance off the back of a wide-margin success at Naas in February and travelled with plenty of zest in the hands of Mark Walsh.

Jacksonslady was tracked by fellow McManus runner Ned Buntline, the 7-2 favourite, as well as Upazo rounding the home turn, but she saw them both off in the end.