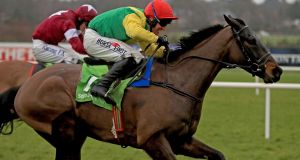 Sizing John made his first start at three miles a winning one when beating Empire Of Dirt and Don Poli at Leopardstown.

The horse owned by Ann and Alan Potts also had the option of lining up in the Ryanair Chase at Cheltenham but a quick decision to opt for steeplechasing’s ‘blue-riband’ has been taken.

“The decision has been made and he goes for the Gold Cup. The owners want to go for that after their other horse (Alary) didn’t sparkle on Sunday,” Harrington has confirmed.

“This horse was my first runner in the Irish Gold Cup and it was first runner - first winner: let’s hope beginners luck continues to Cheltenham,” the Co. Kildare trainer added.

The Cheltenham Gold Cup is over two and a half furlongs extra than the Leopardstown race but Harrington is confident Sizing John’s stamina can stretch even further.

“I don’t think the distance will worry him at all. He was keen for the first half mile yesterday and still got home. There was no sign of him stopping at the line,” she said. “As Robert (Power) says, he jumps so quickly that he can take him back all the time.”

The Potts owned Alary had his second run for Colin Tizzard at Exeter on Sunday but looked beaten when falling at the third last in a four runner race.

Sizing John is a general 12-1 in betting lists for the Gold Cup.