Mullins’s superstar Faugheen pulled up at Aintree with irregular heartbeat 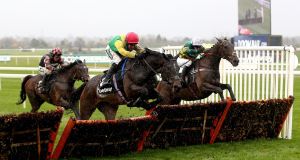 Magic of Light will be Jessica Harrington’s first ever Randox Aintree Grand National runner on Saturday and the renowned trainer enjoyed a perfect Liverpool boost on Thursday with Supasundae.

However, the Grade One highlight proved disastrous for Willie Mullins who’d enjoyed a Betway Bowl victory with Kemboy earlier on the card.

Within 40 minutes of that, Aintree’s famed capacity for generating emotional roller-coasters got underlined once again as Mullins’s veteran superstar Faugheen was pulled up with almost a circuit to go.

One of the highest-rated hurdlers of the modern era was subsequently found to have an irregular heartbeat after Ruby Walsh reported him to be “lifeless” through the early stages. The horse was sound afterwards although his racing future could be in doubt following the discovery of a heart issue.

“He was never going. He couldn’t hold a position and didn’t take me to any of his hurdles,” Walsh reported. “He did everything he doesn’t do. I took the safest option and pulled him up.”

As if that wasn’t bad enough Faugheen’s stable companion Melon was still in the lead when taking a crashing fall at the third last. He too appeared unscathed and it was ultimately Supasundae who emerged best on the rain-softened ground.

It was Harrington’s second win in this race but the woman who won a Cheltenham Gold with her first ever runner in 2017, and last year broke new classic ground on the flat with Alpha Centauri, has a new big-race target in her sights at the weekend.

Magic of Light is one of the 50-1 outsiders among the 40 runners that were declared for Saturday with 21 of them Irish trained and including a record 13 from Gordon Elliott’s yard.

However later on Thursday Pat Kelly’s Mall Dini was reportedly ruled out of the race with a leg problem. The English hope Just A Par is first reserve.

It’s 34 years since the last 50-1 winner, Last Suspect, but only six since Aurora’s Encore won at 66’s, and the way Supasundae bounced back to form after Cheltenham is encouraging for the Harrington team.

“I don’t know what went wrong at Cheltenham. All I can put it down to is that it was very sticky ground and he didn’t like it.

Power managed to get himself back in style too having not ridden since the Cheltenham festival due to a back injury.

He has opted not to ride Magic of Light and instead teams up once again with Elliott in Saturday’s big race. Power and Elliott combined to win the world’s most famous steeplechase with Silver Birch in 2007.

Since then Elliott has established himself at the top of the game and his status is graphically illustrated by having made 13 declarations for Saturday. However, on Thursday evening two of those, Don Poli and Outlander, were sold at auction and will run for new trainers, Phil Kirby and Richard Spencer respectively.

Even so, Elliott’s 11 runners beats the previous National record which was the 10 horses Elliott’s mentor Martin Pipe saddled in 2001.

That race was famous for how the winner Red Marauder was one of just two horses to finish without mishap on heavy ground conditions.

The going is unlikely to be as testing this weekend but steady rain on Thursday undoubtedly put the emphasis on stamina.

It wasn’t what Elliott wanted to see for the National favourite Tiger Roll who will try to become the first horse since Red Rum 45 years to win the world’ most famous steeplechase back-to-back.

“I wouldn’t want to see too much more rain – I don’t want it to be too testing,” Elliott admitted on Thursday ahead of Tiger Roll travelling to Merseyside.

Bristol De Mai’s defection from topweight means the diminutive star has 11.5 to carry and the trainer added: “It is what it is. Every horse has gone up 4lbs. It’s not what I wanted but that’s the way it is.

Mullins has four National declarations topped by Walsh’s selection, Rathvinden. Pleasant Company, so narrowly beaten by Tiger Roll a year ago, will be ridden by Paul Townend.

On Friday Mullins is likely to resort to tried and trusted tactics with Min in the featured JLT Chase.

Faced with the mammoth task of trying to beat Altior in last month’s Champion Chase, Mullins opted to improvise and restrain Min.

“I think the change of tactics backfired in Cheltenham, which happens,” Mullins admitted on Thursday.

Rachael Blackmore partnered a third Irish-trained winner at Aintree on Thursday as Moon Over Germany, in the Mall Dini colours of owner Philip Reynolds, landed the Red Rum Handicap Chase.