Gustav Klimt’s win sets up tilt at at Newmarket 2,000 Guineas 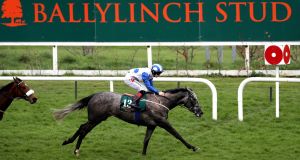 Gustav Klimt booked his ticket for Newmarket in swooping late to bag the Ballylinch Stud 2,000 Guineas Trial Stakes at Leopardstown.

Aidan O’Brien’s charge had been off the track since winning the Superlative Stakes at Newmarket last July, but punters were still keen on his chances, sending him off the 6-4 favourite for the seven-furlong event.

Ryan Moore settled his mount last of the four runners, with stablemate Kenya setting the gallop, and still had plenty of ground to make up when the race-fit Imaging kicked for home in the straight.

But Moore kept his cool and as Gustav Klimt really started to motor, the Galileo colt eventually eased to the lead to run out a cosy length-and-three-quarter winner in the end.

“We’re very happy. Obviously the ground was far from ideal, but it was nice to get a run into him as it’s a long time since he ran. Ryan was very happy with him,” said O’Brien.

“Ryan said he was very impressed with the way he quickened in that ground. He’s a real good ground horse.

“Newmarket [Qipco 2000 Guineas on May 5th] is the plan if everything is well.”

Kenya was an 11-length third, with last year’s champion juvenile US Navy Flag last of the four, a further two and three-quarter lengths adrift, although O’Brien was not too disheartened.

He added: “We knew he’d hate the ground, but he needed to get out and Donnacha’s [O’Brien, rider of Kenya] horse will stay further.

“US might go to the Guineas now and he’ll grow another leg between now and then.”

Who’s Steph sprang a minor surprise as she triumphed at odds of 10-1 in the Group Three Ballylinch Stud ‘Priory Belle’ 1,000 Guineas Trial Stakes.

Ger Lyons’s runner benefited from a smart ride from Colin Keane, who was firmly in control turning for home, with market leaders I Can Fly and the well-touted Yulong Gold Fairy primed to challenge for O’Brien and Dermot Weld respectively.

However, while both those fillies gave it their best efforts down the middle of the track, Who’s Steph found a little extra under pressure to win by a length and a half.

Lyons will now have to consider the options for his daughter of Zoffany, as she does not hold any Classic entries.

“The second closing of the Irish Guineas was the other day and I said to the lads ‘ah, we’ll leave it, don’t be silly’,” said Lyons.

“She did that well and went through the ground, we know she wants it. If it was good ground we wouldn’t have run her because she wants every bit of a mile.

“I’m not a fan of buying fillies because unless you get black type you are stuck with them. When you have them this good it makes up for all the others.

“We’ll go home, sit down and make a plan. The dream is still alive at the moment, but we don’t have big early closing entries with her.

“I’m not a traveller, I love staying at home, so we’ll find something here for her and there will be no firm in it.

“There’s every chance she could come back here next month, but if a good offer comes in, she’ll be sold because she’s a filly. This is the first batch of fillies we’ve ever bought.

“She’s named after my daughter Kerri’s friend. I used to take the mickey out of her when she was in school and the little girl was coming home with her I’d say ‘who is coming home’ and she’d say ‘Steph’ and I’d say ‘who’s Steph?’. It used to drive them insane!

“So by coincidence we named this horse after her and it turned out to be a good one.

“The horses are well and I’m delighted with them and the ways things are going.”

Nelson made virtually every yard of the running to inflict a surprise defeat on fellow O’Brien-trained runner The Pentagon in the PW McGrath Memorial Ballysax Stakes.

The Pentagon was the choice of Moore and was sent off the 13-8 favourite for the Group Three heat, but he proved no match for the Donnacha O’Brien-ridden Nelson.

Positive from the off, O’Brien asked his mount to respond as another Ballydoyle inmate, Delano Roosevelt, started to press his claims in the home straight and the winner eventually proved half a length too good.

O’Brien said: “You’d be delighted with that, it’s tough going out there.

“Ryan was very happy. He said of all our horses he rode he wants real nice ground, but he’ll come on a ton. It was great because you need to get the racing miles into them.

“Nelson handles soft ground looking at that. Obviously, we had to have something to make the running and he’s the fella that held up his hand and said he wouldn’t mind going on.

“He had gone forward in his races before and won around here before making the running.

“He’ll come back for the Derrinstown and that’s what they’ll probably all do.”