What, where, when, who are the favourites, the best of the Irish and the women to watch 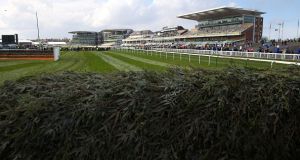 This is the ultimate challenge in jump racing as 40 runners and riders take on Aintree’s famous 30 Grand National fences. The course is four and a half miles.

The 171st annual running of the Grand National is held at Aintree racecourse, which is located in Liverpool.

When is it held?

This year’s race gets underway on Saturday (April 14th) at 5.15pm. It’s the second last of the day’s seven races.

For the second year in a row the race will be shown live on ITV (and UTV). Coverage will run on Saturday from 2pm to 6.15pm. AP McCoy, Luke Harvey, Mick Fitzgerald and Brian Gleeson will provide analysis.

Can I still go?

The only remaining tickets - and they are ‘limited availability’ - on Grand National Day are for the Steeplechase enclosure. From here you’ll have viewing of the first fences but this area does not give access to the parade ring and grandstands side of the racecourse. You can book them here.

The forecast via the Met Office is for dry and cloudy weather with brighter spells, but after so much rain this month the going is soft on the Grand National course. In only two of the past 16 years has the going been any slower than good-to-soft.

Tell us about those famous fences?

The first Grand National was won by a horse called Lottery in 1839, and while the fences are slightly more forgiving now they still make for one of sport’s most wide open major events.

Becher’s Brook: The sixth and 22nd fence is a lot more difficult than it looks from the take-off side. That’s because it’s landing side is 10 inches lower.

Valentine’s Brook: The ninth and 25th fence is the third of four famous fences to be jumped, one after another. It’s named after a horse that’s said to have jumped it backwards back in 1840.

The Chair: The 15th fence is the tallest on the course - it stands at five foot three inches. It’s also the broadest and has a six foot wide ditch on the take-off side.

Foinavon: The seventh and 23rd fence is the smallest on the course - named after the 1967 100/1 winner who avoided a mêlée at the fence and went on to win.

Canal Turn: An old Aintree myth claims that the horses who refused the sharp left turn after jumping the eighth and 24th fence ended up in the Liverpool and Leeds canal.

Who is the favourite?

As of Friday morning the top 10 in the betting are;

How is the Irish challenge looking?

Only two of the last 10 renewals have had an Irish winner, and as noted above, they were both run on soft ground.

The husband-and-wife trainer-jockey combination of Ross O’Sullivan and Katie Walsh will be represented by Baie Des Iles, and on this week’s Added Time podcast Walsh discussed her chances.

Willie Mullins will hope Total Recall will give the champion trainer a second National success 13 years after Hedgehunter in 2005. In all there are 14 Irish-trained contenders looking to become the 17th Irish-trained winner of the National since 1900.

For the first time in 30 years, three women are set to ride in the National on Saturday.

Rachael Blackmore spoke to Brian O’Connor about what she’s expecting - “The unexpected!” As well as Blackmore and Walsh - who came closest to history when finishing third in the great race in 2012 - the young English rider Bryony Frost is on Milansbar.