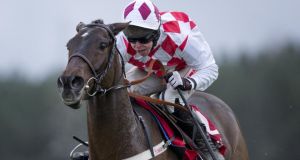 Flemenstar got his season off to the best possible start with back-to-back victories in the Boylesports.com Fortria Chase at Navan.

Now in the care of Tony Martin, having left Peter Casey, one of the stars of the winter game jumped exuberantly throughout under Andrew Lynch.

Sent off the 1 to 4 favourite against three rivals, he tracked Realt Mor the whole way until jumping into the lead at the third-last.

Days Hotel, who looked to be well beaten down the back straight, creditably stuck on gamely, but while Lynch had to shake Flemenstar up after the last, there were not too many worries for connections.

Martin was securing a Navan treble after earlier victories with Dedigout and Spacious Sky.

Lynch said: “He was just a bit fresh with his jumping and he got a bit high at a couple of them.

“We went plenty quick enough and I had to keep going with him the way he was jumping, it was just a bit big.

“He was a bit like that this time last year, though, his first run back is always a little bit ring-rusty.

“He picked up after the last. It wasn’t ideal getting there that early but his jumping took him there. You’d have to be excited about the future.

Martin said: “He was a bit extravagant – his jumping was a bit big. He let fly at a few down the back but I’m hoping that was freshness.

“We’ll take our time with him. I’ll have a chat with Andy (Lynch) and Steve (Curran, owner).

“He’s entered in everything but I’ll give it two or three weeks to decide where next.

“I’m still finding my feet with him really. I’m happy that’s out of the way. With good horses like that you are always nervous and he’ll improve a bit fitness-wise. He was idling a bit in front.”